Anyone tried Cover-roll for securing sensors? 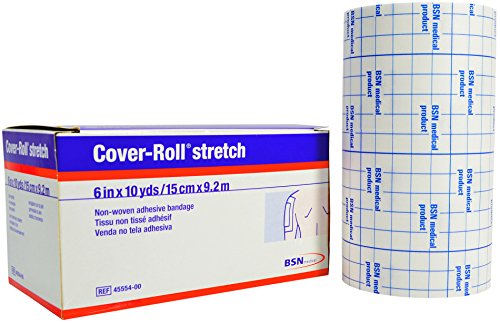 I have it on very good authority that it looks just like the adhesive patch on the Dexcom sensors, which for me is a comfortable dressing. What we don’t know is just how tenacious the adhesive is. Anyone applied this to a Dexcom sensor, or even the MM sensor and had it stay stuck on for a week (or more)?

It is so much cheaper than alternatives that if it works, it would be a fantastic choice.

Looks a lot like Op-Site Flex-Fix-- except for that 6" width!

Think how economical this stuff would be IF it works well. I could get over 75 patches out of that for less than the cost of some other dressing listed on Amazon such as simpatch. And that one might be too thick to be comfortable. Also, a ton of negative comments about it, unless you view the “waterproof” version page.

We use Hypafix. It’s clth, very similar to Dexcom’s sensor patch, so not completely waterproof. It lasts a week as long as my daughter doesn’t swim. It absorbs water during showering but dries fairly quickly. Ideal for securing and covering dressings.

Here’s a comment from someone on Amazon’s Hypafix page: 'Slightly cheaper than the other-branded dressing retention tape I purchased from BSN Medical (titled “Cover Roll”), but exact same performance. Only brand-labeling on the tape backing (stuff you remove so you can affix the tape to skin) differed in wording and color. It’s literally the exact same product, just rebranded for different resellers I’m guessing. Even the box it comes in is the same design, just different words."

IF they are to be believed, it and Cover Roll are the same product.

The swimming comment you made has me a bit concerned. I want a dressing that is going to reduce the likelihood that I’ll lose a sensor due to excessive sweating (I’m rarely in a pool, but I’m in the shower each day for about 15 minutes).

I use Hypafix on my infusion sets (contact detach) and find that it works well there, but doesn’t work very well for Dexcom sites. Showers and swimming make it come off very easily. I’ve recently stated to use Flexifix, and that tape is amazing for both showers and swimming. It lasts for at least a week, usually, before I need to replace it. It’s quite a bit more expensive than Hypafix, though (and I find that other clear tapes, such as Tegaderm and IV3000, either don’t still well with swimming or irritate my skin).

Thanks Jen. I am on day 6 of my first Dexcom sensor. I noticed a bit of lifting at the edges, so I applied some stinky Mastisol to the lifted edges and pushed them down til they appeared to be stuck well. Ever used Mastisol for that purpose?

I used to use IV3000 for my MM sensors but sweating would cause the sensors to fall off. Tis a shame since I’ve got lots of IV3000’s here. I like the thinness of the IV3000, but too much moisture accumulates under them, resulting in failure.

Are you getting Flexifix from Amazon or elsewhere?

I need a comfortable dressing that is really good at preventing sweating related adhesion failures.

I am on day 6 of my first Dexcom sensor.

@Dave44 - Are you planning to restart the same Dex sensor or will you be switching to a new sensor? It is FDA approved for 7 days but many people (including us) restart the same sensor if the numbers are still good.

Are you getting Flexifix from Amazon or elsewhere?

Yes, Amazon is the only place I can find to buy it in Canada. Though it’s really expensive, about $40 for one roll.

I don’t like removing sensors that are working well, Tim.

I use sensors for about a month before they stop working. I’m not sure how sheets of Flexifix I get out of a roll, but it seems that a piece of that lasts about a week (of showing and swimming) before I need to change it. Sometimes I put two pieces on just to make sure there are no gaps where water can get underneath.

@Dave44 - In which case bear in mind that you can stop the sensor earlier and immediately restart it. You get a 2-hr blackout. At first it seems odd to stop it early but really no difference as you are restarting it anyway.

Benefit is you can pick when you want the blackout which of course is followed by a mandatory calibration before getting the cgm numbers to start picking up again.

I will get it on day 6 or day 7 if I see a time that appears convenient based on cgm readings and anticipated bolus/food.