The last 2 or 3 mornings my blood sugar has gone up about 20+ points starting about 6 am (per my CGM, from 119 to mid 140s this morning). I did a lot of yard work yesterday so I was actually concerned about going low overnight! I do MDIs with 13 units of Lantus at bedtime and am wondering whether increasing my basal by 1 unit might help. Thoughts, anyone?

Well… it is possible that increasing your basal might help with DP; however, assuming your basal is dialed correctly for your other daily needs, it may also cause you to go low either overnight or later in the day. You would have to try it and watch very carefully to find out.
(I’m on a pump, so I did use a basal adjustment to assist me with DP, but only for a short amount of time prior to the problem hour(s).

Other methods that have been suggested to me for managing eliminating DP are to have an extra 15-20g of carbs in the evening, especially if accompanied by some fat and protein to slow down digestion. That can help. I have actually found that adding some carbs to my dinner has been helpful for me. Another suggestion was to have a glass of red wine or a single shot of spirits in the evening. Alcohol is processed by the liver and precludes glyconeogenesis – usually around 8 hours after consumed. You have to be careful with this, as well, because too much can cause you to go low when your liver should be supporting you (when functioning normally).

As with all things, YDMV, of course.

I’d proceed with caution. Is it possible that the increase in BG in the morning hours might be related to protein or fat you ate the evening before? It takes roughly three to six hours for approximately 58% of protein eaten to convert to glucose and roughly eight hours for 10% of fat to convert to glucose according to a carb counting chart on the University of Washington Medical Center website. If that seems to be an unlikely cause, I’d test during the night the first few times I’d try a dose one unit higher. Or perhaps I’d wait a few more days observing similar early morning BG increases before I proceeded to up the dose.

Isn’t is so frustrating when things are going fine and than all of a sudden things go hey wire. Over my diabetes career I have had this dawn phenomenon on and off. A few months ago, I’d drop but now I’m doing the same. Wake up at 7 am and by 11 am I’m climbing into the 200’s. So basal testing is an on going process for me. My frustration is that you need to let it run for 3 days at least to see if there is a pattern. And of course the first 2 days same climb and than the next day, you fall. So for me I’m looking at my CGM daily reports every two weeks and make adjustments than. Otherwise, I’d be making changes all the time. Patience, the wait and see game. It’s not fun to sit and watch what your blood sugars does but it really is all about waiting and watching and not making snap decisions. A CGM makes this so much easier and I’m not sure if that is in our treatment plan or if you can get one from your doctor for a week or so to see what is really happening throughout the day. Something you might want to look into if you don’t, or can’t do a CGM. Good luck and sorry that I also didn’t have an answer for you. As stated above YDMV and it will. Good luck and hang in there.

Here’s an article from Gary Scheiner: https://www.diabetesdaily.com/blog/dealing-with-dawn-phenomenon-312515/ – Dunno if it is at all helpful. There’s also another link suggested after the article – ignore if useless

Thanks, everyone–will proceed with caution, as advised. Will also watch pre-bedtime protein (I love almonds!) and make sure to stay hydrated (may have been a little dry especially last night after mowing).

ETA: My sensor is also acting wacky (only 3 days since I started this one).

I don’t mean to sound depressing but having DP only rise 20 mg/dl is a win in my desperate part of the world. I seem to invariably have to awake and immediately take a correction just to deal with the inevitable.

That is a total bummer, Brian! This is such a weird change of pattern for me so I want to get it figured out before we head out on a trip next month.

Everyone is different. My Darn Phenomenon is like the bane of my existence. I’ve often tried to figure out why it happens. The best explanation I have come up with is when I set up a camera and took a picture of it happening:

I don’t mean to sound depressing but having DP only rise 20 mg/dl is a win in my desperate part of the world. I seem to invariably have to awake and immediately take a correction just to deal with the inevitable.

Haha, @Brian_BSC I was thinking the same. My DP can be so brutal sometimes that it will raise me by 70-100 mg/dl!

There are several threads on here of me complaining about going to bed in the low 70s (or even lower) just to wake up to 160 or higher, and it will keep on rising until I correct it aggressively.

When I was on Lantus/Novolog MDI, my endo started me on Metformin to try to bring my DP under control, but it didn’t really work. Going for a run in the evening helped rein it in a bit, but only a bit. I even resorted to giving myself a bit of Novolog using a guesstimate dose based on what my BG was at bedtime. That one my endo really disapproved of. The one thing that really did finally work–and I realize this is not going to be much help–was going on a pump. Setting a rate that goes from 1unit/hr at 12am to 3.25 at 2:30 and down to 1.25 a 7am. finally seems to have nailed the beast.

Just want to say I did much better this morning–ate a small carb/protein snack before bed as suggested above. I dunno what was going on but that’s the way D is sometimes…unpredictable and frustrating! 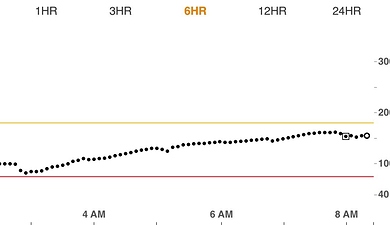 Truly DP is one of the harder things to get a handle on. Have you tried Metformin? Didn’t totally fix it for me but it did attenuate it. Worth a try if you haven’t already.

@CatLady06, when did you wake up? I have always awoken and immediately taken a bolus to address my DP. Would you be able to do that? It might help, with DP if you just let it go your blood sugar could continue to rise all morning.

Splitting the Lantus dose is sometimes a solution for this, or so I’ve heard; my endo never proposed it back when I was on MDI so I don’t have any experience to draw on. One thing I have experienced is that DP has a tendency to “re-set” itself–something seems to work at first but then it’s like my liver decides it just needs to work harder to overcome whatever I’ve done in order to give me the BG spike it thinks I need. Cranking my overnight basal was the only thing that finally stopped it but I was cautious about getting there–convincing myself that it needed to go as high as it did took a while. Non-pump equivalent would be to routinely wake yourself up around 3am and take some novolog but that’s not such a fun solution, risk-wise as well as waking up out of a sound sleep for a sharp poke in the abdomen-wise.

Have you tried Metformin?

The doc initially put me on Metformin along with basal/bolus but it caused me to have huge exercise lows and also lows during the day when basal normally keeps you steady. I was eating all the time and still losing weight, too. Not a good experience!

I have always awoken and immediately taken a bolus to address my DP. Would you be able to do that?

That sounds like a good idea, Brian. Sometimes the old cat gets me up at 6, usually I’m up at 7 but today I slept in.

One thing I have experienced is that DP has a tendency to “re-set” itself–something seems to work at first but then it’s like my liver decides it just needs to work harder to overcome whatever I’ve done in order to give me the BG spike it thinks I need.

That’s totally annoying, eh? And I think if this happened I’d want to switch to a pump.

Sally, I hear ya…and you sound like me. The minute I think I have a ‘pattern’ dialed in, it changes, what caused me to go low now I’m high…it’s never linear for me and very seldom makes sense…that’s why I’m not on pump…I’d just be changing it all the time, it seems.

hum, I was told fat was the only thing that really doesn’t raise BGs. So, the stats you posted means what…that kind of implies we can’t bolus properly for meals because the bolus would burn out before food turned into glucose and hit, .but many most of us do…so not sure what we’re supposed to do with the info you posted?

i live in new jersey. as soon as the cold weather hit, my morning fasting went up about 20 points. all during the summer i didn’t take my metformin because I would wake up in the 80s. now all the sudden i am to 100 plus. this has happened to me before. i hoarded metformin all summer (prescribe 500 mg pill 1x a day for prediabetes) so i could take a bigger dose during the cold weather (500 2x or 3x a day).