Last week I had surgery to remove a lump in my breast. The surgeon called and said it was not cancer but a rare diabetes complication. I looked it up and it mainly happens with long time uncontrolled Type 1’s. Well, I am a well controlled Type 2 for the past 8 years. I was also dx’d with Retinopathy and Diabetic Macular Edema last month. Has anyone else been dx’d with this?

I know someone who has, another long time T1D like myself. She hasn’t been on here in a while, I’ll reach out to her and see if she’ll pop in & comment.

Everything I read says it is a complication of Type 1. I am a Type 2 or at least I think. I see my surgeon on Thursday, so I will quoz her on whether it is an immune disease related to Type 1.

let us know what she says. How is this diagnosed? Just wondering if it’s a different thing from an ordinary benign mass.

All I know is the pathology report came back and said it was a very rare disease called Diabetic Mastopathy. When Inlooked it up it said it is mainly found in long time Type 1’s or people with autoimmune disorders, From what I have read it has to do with an autoimmune attack on the colagen in the Breast. I also have muscle atrophy in my arms and legs that I blame on Statins.

This article explains it a little 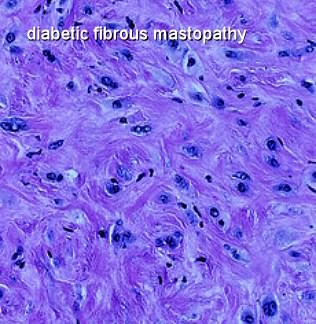 This page contains brief information about the topic of fibrous diabetic mastopathy. It comes up from time to time, and people seem to like it.

I had my follow up appointment yesterday. The surgeon says she has seen this before, only in diabetics. So it is a different kind of mass that looks just like Cancer. She even told me from my films and sonogram she was sure I had Cancer. Only a pathology report can tell the different. She said it was caused by vascular damage within the breast. People who have nupeuropathy and retinopathy are at risk. She also said it will probably reoccur. Since Onmthe mammogrammit looks like cancer, Biopsy is the only way to tell the difference.

Hey Jeannie - sorry I’m the one that MarieB mentions (I’ve got my hands in too many social media pots for diabetes - but Tudiabetes still is closest to my heart - since it helped me teach myself how to use an insulin pump … long story … you’d have to go back to all my blogs at Diabetes1.org that I started posting at back in 2008). Here’s the blog I wrote about back then … some of the links may not work … have to recheck them when I have time (time? time? what is time … 26 hours in a 24 hour day). Here’s the link (and I think I posted this on the blog section when the site was Tudiabetes … it has changed abit … so it is probably no longer there) .
Surgery should never have been done on what I was having … and is what lead to what you will read in the blog … totally rebuild of left breast … if will never age … tickle my toes … like my other breast will do (I’ll just sling that over my shoulder like a boulder holder). Main thing … NOT CANCER!! But initially that is what my doctors thought, until I discovered what my condition was.

They knew from the first core biopsy that it was not Cancer, but they were convinced it was something that could grow into Cancer. So I had the lump taken out in surgery. It was the second pathology report that dx’d it as Diabetic Mastopathy. I am still not sure what caused it. I am a well controlled type 2 for the past 8 years. I have been reading everything I can get my hands in. It seems it is an inflammatory response to something which causes overgrowth of collagen. It is this collagen thst breaks down and Forma the benign lumps. All my surgeon said was she has seen it in other diabetics and that it would probably regrow. So like you I am on my own to gather info on how to prevent reoccurance. I am also way past menopause. I also had a sister who did have breast cancer, so all my alarm bells went off. From what I understand it will be even more difficult to detect lumps with surgical scar on a mamogram. So I don’t know what exactly I am in for.