From Novolog to Fiasp and back to Novolog again

I used Novolog as part of my MDI then pump treatment for about2 years before switching to Fiasp last year.
I had decent control over my A1C with Novolog, but I definitely rode the BG roller coaster. A1c was 5.8 to 6.2.
After starting Fiasp, I, like many others, had the outstanding initial results. This was some that I wouldn’t say wore off, but maybe ‘toned down’ would be better term?
Well, about a year worth if Fiasp, running my A1c between 5.6 to 5.8, I was doing good. Then updated to the Basal-IQ on my Tandem X2 and dropped to 5.2!!!
Well, I have been buying Fiasp out of pocket the entire time, as the VA does not have it in it’s formulary as of yet.
Finances change, and I couldn’t justify spending the extra on Fiasp, so I switched back to Novolog for now.

Let me say this, I am back on the BG roller coaster again! And I am not happy about it.
I guess it goes with the saying, you don’t know what you have until it’s gone.
The Basal-IQ and Fiasp were meant for each other! And while Basal-IQ still works with Novolog, it doesn’t balance out the curves nearly as well as it did with Fiasp.
With Fiasp and Basal-IQ, and an A1c of 5.2, I never had any bad, or any even moderate lows. Even though Dexcom would say I might dip into the 50’s, I was really still in the 60’s. So I barely dropped below 70, and that wasn’t often. And very controlled. I rarely had to eat anything for a correction.

Now, with Novolog, I am dropping past 70 in a manner where I can feel it, and it doesn’t feel good. I would say I am venturing into the upper 50’s. But I feel like I MUST correct for these. Control-IQ cannot catch them in time with how Novolog has a longer tail, and the later action itself doesn’t help.

Now, I will say, I haven’t been able to pre-bolus like I should. I try, but my job does not allow for this to happen. The weekends are more forgiving on this.

Also, exercise is a lot harder with Novolog compared to Fiasp. The longer tail makes it hard to take a partial bolus for food compared to how easy it was for Fiasp.

Ok, long winded, but, even after a year or so on Fiasp, ALL the benefits, not just the initially quicker action curve, are still very beneficial to me and my T1.
I didn’t think I would have this much trouble switching back to Novolog. I now realize just how much better Fiasp is for me in giving me a better quality of life that cannot be justified by the cost savings.

Did you consider getting Fiasp from Canada?

That is where I have been, but to take advantage of it, I buy 9 vials sat a time for about $500 at a time. It is a good price and deal, but I haven’t had the needed income to spend this amount.

I am realizing that it is worth it for me to do this, I just need to figure out how I will afford it.

Thanks for that perspective. I’ve been pumping Fiasp for about a year, and occasionally wonder about switching back. Biggest issue is bolusing when there’s a significant fat content in the meal. I’ve had one scary low when Fiasp come on faster than the carbs (ah, Pizza, there’s no satisfying you), and I’ve had to work on my dual bolus chops to try to catch delayed spikes that Novolog’s longer onset curve might have dealt with a bit better. But on the whole I find it much easier to manage with. Faster is better.

Yeah, pizza is always a chore.
I find that super bolusing, plus planning for a small snack later to balance it out really helps with Fiasp. Not so much with Novolog.

I got the super bolus part right. And the snack too, eventually, but only after I got hit one of those Holy crap my eyesight is going drops at the playground with my grandkids after lunch. Fortunately my daughter had a Snickers bar in her glove box. I’d managed to come out without anything. Worst thing with that is that of course the carbs do finally come percolating along. One minute you’re graying out and half an hour later your bolusing like crazy trying to get ahead of delayed pizza carbs AND a candy bar.

Also, exercise is a lot harder with Novolog compared to Fiasp. The longer tail makes it hard to take a partial bolus for food compared to how easy it was for Fiasp

I’ve had similar experience, but I really don’t understand why. Fiasp enters your blood stream faster because of the additives. But the active ingredient is insulin aspart (same as Novolog) and once it is in your system, the two behave identically. The Fiasp tail is the same as Novolog. 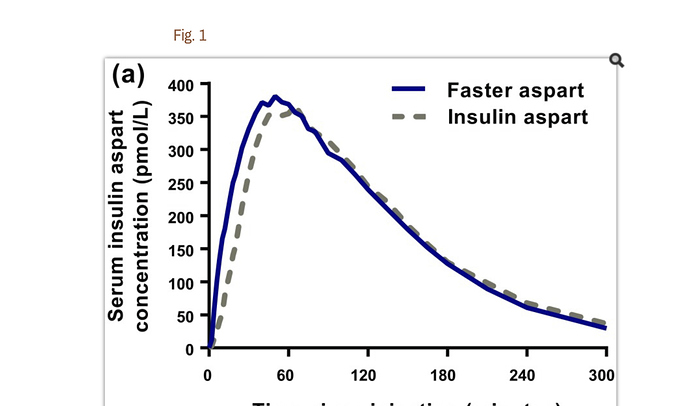 I’ve had similar experience, but I really don’t understand why.

Same here. The one thing I can say is that setting a temp basal an hour before my ride is WAY more effective with Fiasp than with Novolog. I struggle with exercise lows, especially in late afternoon due to the fact that I seem to still produce a small amount of endogenous insulin and for whatever reason that’s when it always kicks in. Right around the time I’m biking home. By then my lunch time bolus should be totally worn off, but with Novolog if my BG isn’t above 130 or so when I leave at 5pm, I’m going to by <70 by the time I get home. With Fiasp, if I zero out my basal at 4pm, and I’m at 120 when I leave, I’m still around 80-100 when I get home. Doesn’t make a lot of sense in terms of published effect curves, but this has been very consistent. There’s just something deceptive about how Novolog behaves in my system. Somehow Fiasp seems to actually behave much predictably according to the rules.

I have the same experience. I think it hits the blood faster, so it’s out of your system faster. It might theoretically last as long as NovoRapid/Novolog, but there is probably so little left in the last 2 hours of the tail that it isn’t noticeable unless you’re really insulin sensitive.

I totally disagree with the curve profiles for both of those!
At least for me personally, they are considerably different.

Yeah, those things always give the impression that there’s one single curve programmed in and it works out the same for every person when the stuff enters their body. But that’s obviously not true. BMI, metabolic rates, insulin resistance, all kinds of things can affect it, not to mention that propagation through the skin is not what insulin normally does. My endo told me a while back something I should have known but didn’t: that we’re actually having to take waaaayyyy more insulin compared to what a functional pancreas produces for the same amount of glucose because we’re having to get it into the blood stream by shoving it through the dermis. So there’s clearly a pretty big fudge factor involved when it comes to the individual metabolism, as opposed to whatever generic mean they’re using to generate these charts.

Yeah, those things always give the impression that there’s one single curve programmed in and it works out the same for every person when the stuff enters their body

That particular curve comes from real patient measurements in a paper comparing Fiasp and Novolog pharmoacokinetic and pharmacodynamic properties in elderly and younger patient populations, so I know it’s not a canned curve. Sorry I didn’t include the reference with my original post.

It was done under controlled conditions so certainly not representative of everyone and all situation. But should take into account some of the variables you mentioned within the patient population tested.

They concluded Fiasp was ‘faster’ up to 120 minutes then matched novolog thereafter. But that doesn’t match my experience. it seems to be out of my system faster than novolog. All these studies need a YDMV footnote.

A Comparison of Pharmacokinetic and Pharmacodynamic Properties Between...

Due to population aging, an increasing number of elderly patients with diabetes use insulin. It is therefore important to investigate the characteristics of new insulins in this population. Faster-acting insulin aspart (faster aspart) is insulin...

All these studies need a YDMV footnote

I just switched to using Fiasp in my pump a month ago from Novolog in the hope of getting faster action to combat a quickly rising glucose curve as shown on my Medtronic pump. I think Fiasp is combating my quickly rising curve better than Novolog but am only speculating so far. What I do know is when my pump injects the Fiasp into my belly I get a stinging sensation which while annoying does let me know that the injection has occurred. Has anyone else had this stinging sensation when using Fiasp?

I get it, mostly at first. After a while it mostly stopped. Would get one that would sting once in a while after that.

I was the same as @Hammer - FiASP stung when infused for the first week or so. That completely disappeared 3 months later

I just went to Toronto, Canada on a business trip. I walked into a drugstore and bought a 10mL vial of Fiasp over the counter for $30. I pay twice that amount as a co-pay (20%) with AETNA insurance in the US.

Sounds about right.
I don’t live THAT far Canada, but it’s still cheaper to ship it.
But, if I have an excuse to be in Canada anytime soon, I will definitely take advantage of this. I would be going to the Vancouver area most likely.

I just picked up a vial in Calgary, Canada.

2 Boxes of One-touch strips: Free (thanks to Alberta Pump program)