I just found out my FSH level is at 45!!! I’m only 29, haven’t had a period since the end of July, and for the last 1.5-2 months I’ve had terrible hot flashes. I’m trying not to freak out until I see my Endocrinologist on Tuesday but it’s so hard. I’m just looking for some words of encouragement–has anyone else dealt with this before? I did read that women with type 1 have a higher than normal risk for early menopause. I hope that’s not what this is

Low fsh is usually indicative of menopause. I’ve forgotten what the other causes could be. Check with your doctor. I hope you come out if it. I also went into early menopause and my doctors did nothing even though I had symptoms for years before low fsh. I was closer to the usual age range though. I read later type 1women go into early menopause and I think thyroid disease affects it too. For a few years I was going in and out of meno. The one benefit for me is no more periods and debilitating cramps.

Are you seeing your endocrinologist or reproductive endocrinologist(RE)? You might want to see an RE sooner rather than later so that you can get a full fertility screening like AMH (ovarian reserve) and AFC (antral follicle count).

Just to clarify for other readers of this thread: an FSH of 45 is actually high (and indicative of early menopause). See the basic reference ranges for a variety of reproductive hormones here: http://www.fertilityplus.com/faq/hormonelevels.html.

To the original poster – best advice would be to see a reproductive endocrinologist (most likely not your regular endo whom you see for T1D) as soon as possible.

Yep you’re I right. I meant high fsh-it has been a while and I was confused.

It also depends on your other levels at that time. Estrogen etc. I don’t remember what mine was at first but the numbers changed for a while. Estrogen was still high and this is not uncommon apparently in Perimenopause. I was told after a surgery I was in full meno for sure but I came out if it and had a period three weeks later. I had also ovulated right at the time of th surgery which was for a polyp and I had an ovarian cyst.

Fsh of 40 is definitely menopause but I think mine was around there before I came out of it. . 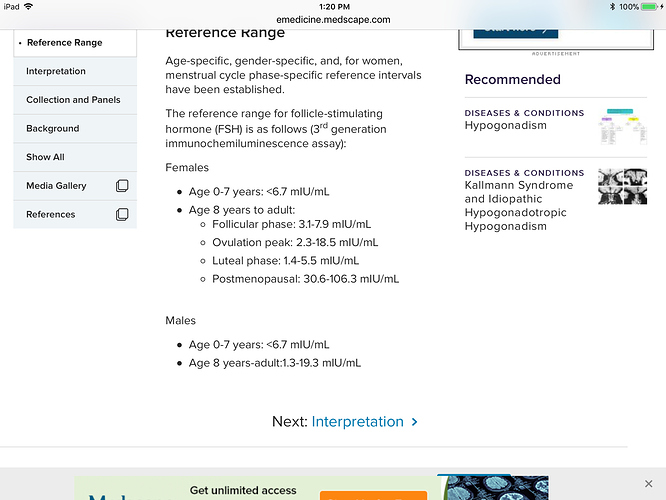 FSH levels fluctuate correct? I read somewhere that one month they could be high, then the next they are back to normal. I didn’t think that was the case but I’m trying to hang onto some hope.

They do fluctuate but I think it’s very unusual to go that high unless perimenoapsue or menopause is on the way. If you see a rep specialist don’t trust completely what they tell you because I was told full meno with no doubt and then I was having a period three weeks later.

The FSH levels do fluctuate, but your worst number is usually indicative of your ovarian reserve. You’ve mentioned that you haven’t had your period since July. FSH is typically measured on day 2-4 of your cycle. Maybe your measurement was done incorrectly? The FSH level fluctuates within the menstrual cycle so the value that was obtained outside of the cycle window probably isn’t good. You should book an appointment with an RE right away for more tests.

Thanks everyone. I saw a regular endo who ran more tests and pretty much confirmed my worst fear, unfortunately. I have an appointment next week with a reproductive endocrinologist. He did say it was highly possible this was autoimmune related, but there’s really no way to be totally sure.

I just wanted to say I’m sorry you are going through this.
I’m in the same boat, although I’m iny late thirties.
I have diabetes type 1 and hypothyroid and had irregular period for the past 2 years and no period since June. At first my gyno considered it as early menopause but my endo run more test and believea it’s autoimmune premature ovarian failure. As you mentioned there is no test to confirm it for sure.
I just came to this site hoping to find other ladies I’m similar situation and get some emotional support. It’s not easy to accept & deal with menopause at young age

Thank you so much. I found out some other surprising news when my Reproductive Endocrinologist ran some more bloodwork–I also have Hashimoto’s Thyroiditis! It’s crazy because I’m not even showing symptoms yet, but I have the antibodies for it. From what I read, that will make it even more difficult to conceive naturally, and increase chances of miscarriage. It’s so crazy, I went from being perfectly healthy to having three autoimmune issues in a span of about 1.5 years

Yeah, it is kind of odd that you’re diagnosed with autoimmune thyroid and diabetes at late 20s but it’s very common to be diagnosed with multiple autoimmune issues. I have been hypo for more than 25 years and diabetic for 14 years. Dont worry too much . I have 2 little kids and my pregnancies were not that bad. Even with ovarian failure, there is still a good chance to conceive naturally and if that doesn’t happen, you can get assistance from meds and technology.
I wish you good luck.

I also found out I have hashimotos about 2 years ago after the meno which was full meno in 2010 I think. My endo has given me a huge problem doing anything about it so make sure you treat it early because one it may help and two it will hopefully make the d a bit easier to treat. I have talked to people on a thyroid site with both. She and someone else said t3 and armour thyroid are better because they both have trouble converting t4 to t3. Which can cause reverse t3 which causes insulin resistance. Levothyroxine, which is t4, makes insulin less effective. In early hashis we seem to bounce from hyper to hypo. If you want children think about freezing eggs now.

Please consider getting checked for celiac disease (autoimmune linked with Hashi’s and TD1). Fertility issues are up there with anemia and GI issues. You can even be asymptomatic with celiac disease. It is a simple blood screening checking for antibodies.

I have Hashi’s and celiac disease. I did finally conceive at 40, but it was a long haul. If only my celiac disease had been identified sooner.

I wish you well.

Thank you @Cyclinglady, I will definitely look into that.