So I’m managing very well on ~50g carbs a day very rarely going over 120 after meals. Today I decided to treat myself with Pho soup. I took 3 units Humalog and had half portion of rice vermicelli in the soup. Result…213 after 1 hour and 244 (yikes!!) after 2 hours. I mean there was not that much of pasta in the soup for my taste. I just bolused 3 units to bring that sucker down. Considering there was aprox. 45 grams of carbs in pasta this result indicates that my insulin:carb ratio is like 1: nothing

Does anyone on LCHF diets notices increased carb sensitivity after having a high carb meal?Or did I just mismatch the timing of the insulin with my meal?

Yes! I just posted about this a couple of weeks ago. When I’m eating ~50 (net) grams a day, I can’t eat anything over about 15 grams at a time without having a huge spike (up to the 300s). Often I have to use double the amount of insulin that works for a low-carb meal to cover the higher-carb meal. But as soon as I go back to a high-carb diet (currently have fallen off the wagon), after a couple of days the same ratio begins to work for the high-carb food. So, I think it has something to do with my body burning fat versus carbohydrates for energy.

I have severe food allergies, so unless I bring my own food absolutely everywere, it can be impossible at times to eat low-carb. I was at a conference just over a week ago where the meal the hotel provided me was a sandwich one day and chicken and rice the other day. Since these meals were already specially prepared separately from the food the other conference attendees got, I wasn’t about to get picky and request low-carb things or not eat them. So, I ate them and just put up with the spikes into the 200s. It creates a major problem for me when travelling, though…

Thank you for replying. Good to know that its not only insulin timing mismatch. I haven’t had that big of a spike since the beginning of my LCHF diet 5 months ago!It must be something with metabolism as you say. I admit that sticking to low carb is just the easiest solution at least for me- steady BS and no surprises but I have the same problems when traveling or during social events. Never know what’s coming

I don’t mind turning down social meals usually—but when people go out of their way to accommodate my food allergies, it’s very hard to then ask them to also make their meals low-carb, and it’s very difficult to turn them down politely when they’ve gone through such effort… This happened to me at a work potluck twice plus at a conference… I suppose I could just never eat socially, which I have done before when I had other suspected food allergies, but that’s extremely difficult to do.

My other big barrier to going permanently low-carb is that it requires that I cook everything. This is really hard for me when I get behind. I try to batch cook, but then on weekends like this one where I don’t have much pre-prepared, I fall back on things I can buy. And I have yet to find low-carb crackers (there are apparently ones called Flackers in the US, but I haven’t found them in Canada, and attempts at making them have either turned out soft or burned) or chips, so when I’m craving those, I often cave. But each time I do go low-carb I stick with it for longer and longer periods, so I think it’s only a matter of time before I figure all this out and make it a permanent change.

It definitely results in better blood sugar control (and much less insulin)!

So, I think it has something to do with my body burning fat versus carbohydrates for energy.

You know, there might be quite a lot in this. If the “fat-adaptation” ideas are right, in that your body becomes accustomed to utilizing fats for fuel rather than glucose, there might be a lag period when you load up on carbs. Since your body is still utilizing stored or consumed fats, it “ignores” the carbs in your meal and your BG rises beyond what your basal+bolus would normally handle (because your liver and muscles aren’t taking in glucose to form glycogen at all).

I think you’re on to something! The other thing I’ve heard is that “eating low-carb raises insulin resistance.” I’m not sure that theory makes more sense than yours.

I find that - for me - the higher carb sensitivity I see when going fairly on a low-carb diet is limited to meals/snacks with just a few carbs; however, when I have a higher-carb meal, I do not see such a difference. Perhaps, though, the higher sensitivity to INSULIN that I also experience after staying low-carb for a bit(as exhibited by much lower basal need) dramatically offsets the carb sensitivity.

For example, except for some weekend meals, I’ve been staying fairly low-carb for most of the last few months. As a result, small snacks that I might have considered almost “free” (with maybe 5-10g carbs) can push my BG up quickly, if I don’t take a bolus dose; however, those larger weekend meals require 20-50% LESS insulin to cover (depending on the time of day) with the same or BETTER results than before I did this. This kind of has made a problem for any sort of accurate dosing – leaving me to a lot more trial/error on larger meals than I like. (Things like, 'that’s really 50g carbs, but if I eat it at noon, it’s going to be treated like 25g, but at 6pm, it’s 37g… )

This is the same person on low and high carb and then given 50g glucose, aka ~100g sugar. 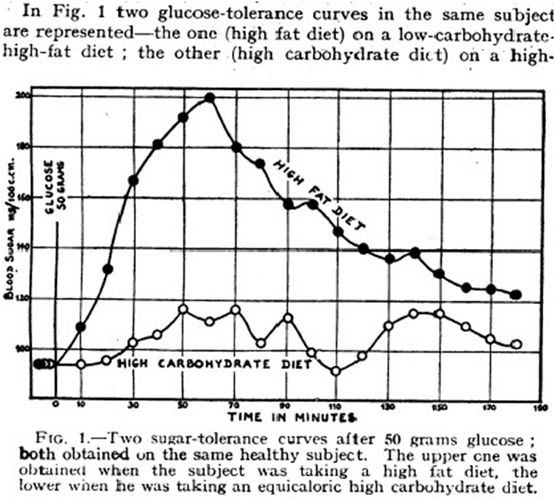 I wouldn’t be surprised if this is a phenomenon that has been well-documented for people who study LCHFs in athletes.

I know they’ve shown that basically, after a certain amount of time on a high-fat, low-carb diet, the body changes how many of the enzymes it’s producing for primary conversion of carbs into ATP. The body ramps up its production of enzymes needed for lipolysis energy generation, but since fat metabolism is basically carb metabolism with a few extra steps tacked on, the enzymatic reaction to produce energy still proceeds more slowly than if someone were burning primarily carbs. In other words, your VO2max decreases, which is why LCHF is not a great diet for people who are doing workouts at all-out intensity for very long. (LCHF is fine for an ultramarathon, but pretty crummy for a marathon if you’re hoping for a competitive time)

This is total speculation, but I’m guessing that if you’re changing how well adapted your cell is for burning fat, you may also be changing the receptors on your cells that ferry in glucose. If the chemical reaction going on inside the cell is proceeding more slowly, then you might expect a lower internal cellular glucose concentration leads to a “closed” state where GLUT-insulin receptors would be less responsive to insulin. Or there would might simply be fewer of these glucose transporter receptors over time if you’ve been low-carb for a while. THIS BY THE WAY IS A TOTAL GUESS!

FWIW, rice noodles and rice will rapidly spike my BG even when I have bolused in advance (harder to do at restaurants) so I know I need a divided dose and/or post-meal exercise if I want to eat these foods. I eat between 90-120 carbs per day.

Always such great source of information on this forum! 3 units did nothing for the rice noodles but then I bolused another 3 units after 2 hours and came down from 244 to 95 in 4 hours altogether. I remember having rice noodles before starting LCHF and same amount would spike me to 170 tops. Your insights shed more light on what can be going on in the body. I still have so much to learn about diabetes.

This makes me pause to wonder if the low carb diet is the best choice. I thought the high fat kept you from spiking.

This makes me pause to wonder if the low carb diet is the best choice. I thought the high fat kept you from spiking.

While sticking to the low-carb diet yes, it’s great. Blood sugars are not perfect (for me, I still go out of range daily), but are far mroe stable. (I do find if I go too low-carb then things become harder to control, likely because I don’t bolus for protein.) It’s when eating low-carb most of the time and then occasionally eating these high-carb meals that people seem to be running into trouble.

this seems the typical low and high carb comparison

As I’ve stated before, I am a happy LCHF convert. But I’d take the Type 1 Grit folks with a grain of dextrose, as they appear to be a little too zealous to me. Just my opinion.

Yes, I’m not a fan of the Type1Grit group due to the behaviour I’ve seen from their members. I tried to join the group and was denied because I didn’t meet their exact specifications. I have no interest in belonging to some clique group on Facebook, which seems to be why that group exists rather than existing as a support group.

I’ve also observed that many (not all, but many) Type1Grit and/or Dr. Bernstein followers on Facebook tend to be condescending and holier-than-thou towards members of diabetes groups who eat high carb, which is not cool either. I think some of these people are “trying” to convince people to try low-carb approach, but in reality their behaviour turns people off from ever wanting to try low(er)-carb rather than opening them to the possibility that it might help.

I’ve also observed that many (not all, but many) Type1Grit and/or Dr. Bernstein followers on Facebook tend to be condescending and holier-than-thou

(a) True
(b) Not surprising

This seems to be a prevalent bit of human nature. The most righteous person I’ve ever known was a recovering alcoholic who had been sober for years and used it as a club to harangue everyone else about what a superior sort of being he was. After a while most people found themselves wishing he would get hit by a bus, get translated bodily to heaven, join the merchant marine, or anything that would take him permanently elsewhere.

some may find them over the top, but there is no denying the results they are getting 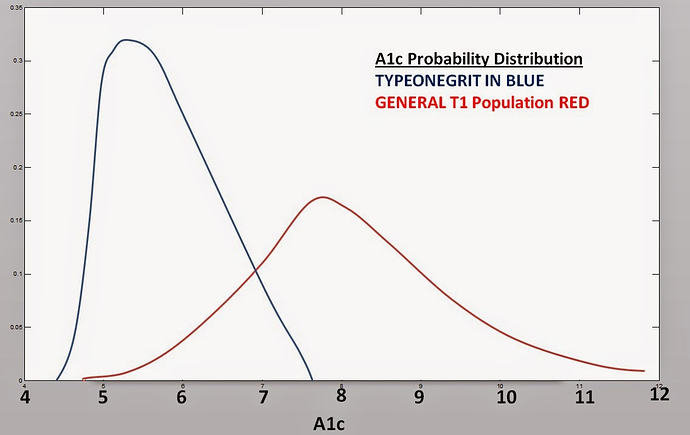 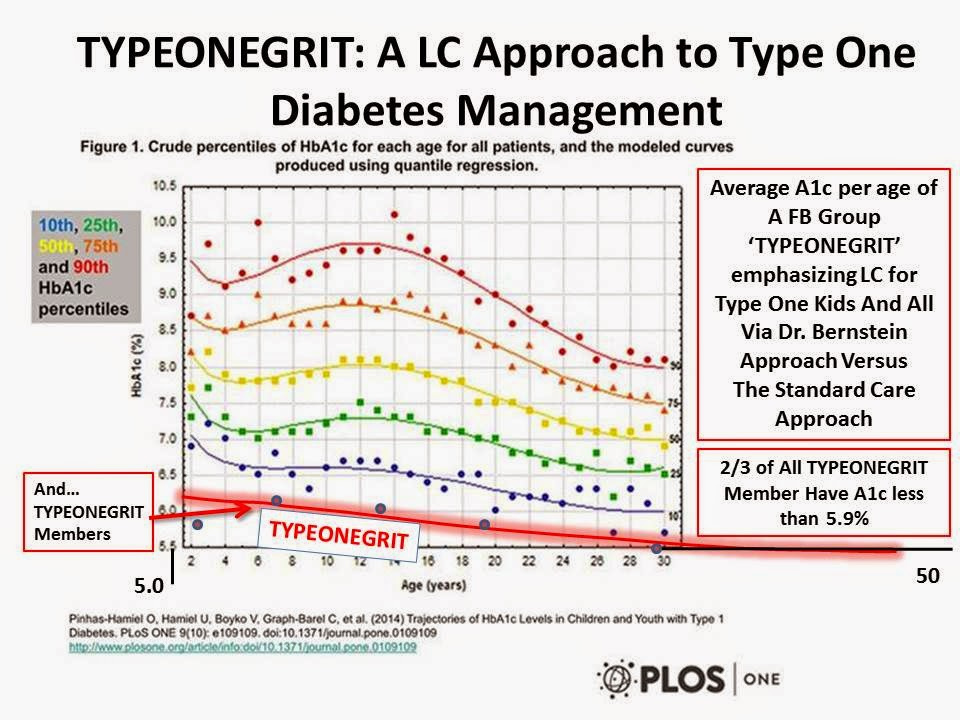 It’s just so unfortunate when good results make people self-righteous and judgmental towards others. Or turn them into out-and-out cultish a$$hats who sometimes progress to becoming certifiable whack-jobs. Sigh…

True, I’m not a member, although it seems very mixed age group. The parents are getting the easy years with the kids BG, before the hormones hit. They handball it over to the kids who can easily founder with puberty.

reformed smokers and drinkers, along with the born again religious, runs a close second to some on T1grit

The problem with groups like Type 1 grit, and to some extent, certain things people like Dr Bernstein preach, is that they are in some ways preaching exactly what they are fighting against.

Perhaps I interpret them wrongly, but it’s almost like they are saying you need to be critical of the established norms that you are told work for controlling your diabetes, but then if anyone is critical of what they are saying, even if that criticism is actually based in evidence, then they can’t be correct.

The reality is, low carb eating does help glycaemic control, but different people will have different success with it. This thread is a perfect example of how what one person experiences may not be experienced by another.