I have been on the OmniPod for four+ years, and I love the system. I have noticed since my switch to the new, smaller Pods that they seem to be stickier (and thus difficult to peel off when I need to change them,and that they leave red outlines which last for days on my skin. Does anyone know if Insulet changed the adhesive on the new Pods? Any suggestions on how to ease the results so I do not look like I was attacked by an octopus?

I use SkinTac to really assure good adhesion so my pods are super stuck on. But I've been an RN for decades and have much experience in tape etc removal form skin. S-L-O-W removal is very key. (forget the old adage of ripping off a bandage quickly...it damages the skin layers!)
Here is my current technique:
After a shower, I use a UniSolve pad to saturate the pod adhesive edges and wait a few min. Then I lift the edges up SLOWLY and push the UniSolve pad underneath the pod and let it sit there another min or more. Then I peel the pod off SLOWLY and use the Unisolve to remove any residue of SkinTac from my skin. I follow up with baby oil on a paper towel as needed. (cotton balls & tissues tend to leave residue pieces)

I have very sensitive skin and was concerned about this before I started using OmniPod. They sent me a sample and I used BARD® Protective Barrier Film, treating my skin first, before I applied the pod. It worked like a charm and I've used it ever since. I have no problem with it staying on or with removing it. I have experienced, only a few times, some minor redness, but it usually goes away in a day or so.

The smaller pods are definitely stickier. I had terrible skin irritations until I used Skin-Prep before sticking on the pod and Uni-Solve to get it off.

Interesting responses, because they feel the same to me. I think the lower mass of the pod itself probably helps it stay on better, but in terms of peeling it off at expiration, I haven't noticed any difference.

I was going to say the opposite...it doesn't seem like the new pods leave as much adhesive behind as the old ones. I dont use anything additional when I apply the pods, and I rip them off without using anything for removal as well.

I have never had a problem with a Pod not staying on, so SkinTac would not be an issue for me; however, I will try your suggestion for UniSolve. I have always been super sensitive to adhesives, but most of the time the old Pods never bothered me. With the new Pods, I can see where I have placed the last four Pods because they burned into my skin. Taking them off is not the primary issue: getting them to not burn into my skin is the real concern.

Thanks for your sugggestion.

From where did you get the Bard Protective Barrier Film? I would be interested to try that as a first line of defense.

The only benefit I have found for the stickier Pod is that when I have it on my arm and bang it against a door frame, the Pod does not budge! I also must remember that for some people, the greater adhesion is a blessing.

I have never noticed any residue left from either the old or the new Pods. My only concern is that the new Pods seem to burn into my skin long before I attempt to remove them.

I get them from a DME (Durable Medical Equipment) company in my local area. You could see if there is a DME company in your area or even your local pharmacy should have or be able to order them in. They are packaged like the standard alcohol wipes. This is the Web address: http://www.bardmedical.com/BARDProtectiveBarrierFilmandFilmRemover.

I showed them to my diabetic nurse educator and she was very impressed; she had seen nothing like them before she said. I had thought they were a fairly standard item. I learned about using them on the OmniPod site (second page):

Thanks. I will check these out.

A miracle product for us podders. I just started on the pod in July, and experienced the exact same problem you describe: Angry red rash/welt after removing a pod. Even if I did it relatively slowly. Then, it takes a week, sometimes longer, to completely go away.

I looked in to this further and discovered the cause is the removal of the top (dead) layers of dermis (skin), leaving the not-quite-mature cells exposed. In short, kinda like a very mild scrape.

Unisolve wipes are the solution. Take a wipe from its packet, carefully wipe around that pod adhesive pad thoroughly, soaking in as much of the aweful smelling stuff as you can. Then, fold it and do your best to slip it as far under the pod in between the pod and the pad as you can.

Then wait a few minutes. I use that time to prepare my next pod. By the time I'm done filling, priming, etc., the old pod almost simply falls off. Sometimes the areas on the pad where the pod itself is glued down are a little stubborn, but you can just take the Unisolved wipe/towelette already opened to gently rub underneath the pad where it's sticking as you gently pull the pod/pad off.

Then, as a final step, unfold the towelette, and use it to thoroughly clean off any remaining adhesive on your skin. Finish up with some alcohol to remove the Unisolve, or soap and water if sensitive to isopropol alc.

Your skin will look, feel, and be as if nothing was ever there. 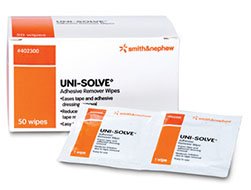 I haven't started on the new pods yet (will on Friday and looking forward to it!) but with the older pods I've used baby oil to help remove them. Taking a cotton ball wet with baby oil and wiping the tape, quickly starts dissolving the adhesive. (Also, I've found the uni-solve pads to have an unpleasant smell and consistency, but that's probably just me.)

At least I’m not the only one! I have also noticed an increase in skin irritation with the new pods!

Nah, they do stink.

But they work really well!

We also use Unisolve, on both our pods and our Dexcom (both my husband and daughter wear a Dex) but we use it out of a bottle. It has a dripper spout, so we just drip the stuff directly onto the adhesive around the pod and let it soak in while we are filling, priming the new pod and prepping the new site. Usually by the time we are done with all that, the old pod just pulls right off, and if there's any gummy adhesive left off, I can wash that off with soap and water because the Unisolve has broken it down by then. I bought the bottles of Unisolve from Amazon

I wear some medication patches as well, so practically the whole family gets into the Unisolve. yay!

I have had the same exspierience. I don’t mind because it feels like they are less likely to fall off while excercising.

Opsite Flexifix is great for keeping a pod stuck! I learned about this product on the Dexcom forum (thanks Clare!) and now I use it for both products.
Yesterday, in a rush, I filled the pod and then dropped it on the floor. :-( I blew it off (to make it sanitary again :-)) and decided to use it anyway. The tape was crumpled on 2 sides. I cut two 1" pieces of opsite flexifix (1 for each of the 2 sides that were barely there)....and poof....it was good as new. I bought the 2" and the recommendation for the dexcom was 4" - but since I cut small pieces and patch, the 2" is working fine. I have purchased other more expensive stuff like tagaderm film and use skin tac (but it hardens). I can't feel this tape at all. Thought I'd share.
I don't know if someone with sensitive skin could use this tape in other ways, but I love it for patching!! Opsite Flexifix on Amazon 2"

I use Hypafix, it seems to do the job quite well.