Hi...I just placed my order for a new transmittor for my daughter's Dexcom. I was then told that I should order a new receiver because the warranty on the receiver is past its one year expiration and I've met my insurance deductible anyway so it won't cost very much. Does everyone only use their receivers for one year? Ours looks great and works just fine. Thanks!

Mine's only 6 months old, but already looks like it could use replacing sometime soon. If you can get it virtually free, go ahead and keep the old one just in case.

Since the insurance would pay for it , and my deductible was already fulfilled, I went ahead and got a new receiver as a backup, but am still using the old one.

My receiver lasted about one and one-half years, and it worked fine the entire time. When it went out, it went out very suddenly. I called Dexcom and they shipped out a new one right away. I got it over night. At first, the Dexcom tech person said that perhaps my transmitter was also bad, but it wasn't. Not only that, I saved the sensor and transmitter I had just inserted, and when the new receiver came, I just turned it on, and it took the two hour calibration time, and started right up with my old transmitter. My transmitter is also out of warranty...but it is still working just fine. I don't have insurance coverage for my CGM so I have to pay for everything on my own. For anyone in that situation, I suggest you call Dexcom directly and set up an account. They are much less expensive than buying through a secondary pharmacy.

When my transmitter died I did decide to replace both the receiver and transmitter. I’ve had more issues with needing warranty replacements for the receiver on the Gen4 and my insurance process for approvals is time consuming so I didn’t want to be without when it eventually died and needed replacing. My out of warranty receiver stopped alarming a month later so it ended up being a good decision for me. Normally I don’t replace just because I’m out of warranty.

I have 2 receivers. One I thought was broken because it would not charge or download to my computer. Dexcom replaced it and since it was already a year old they did not require me to return it. Someone here told me how to do a reset using the pin hole on the back of the receiver and magically my old receiver started working again. So what do you do with 2 receivers ? I use it during the 2 hour calibration period. 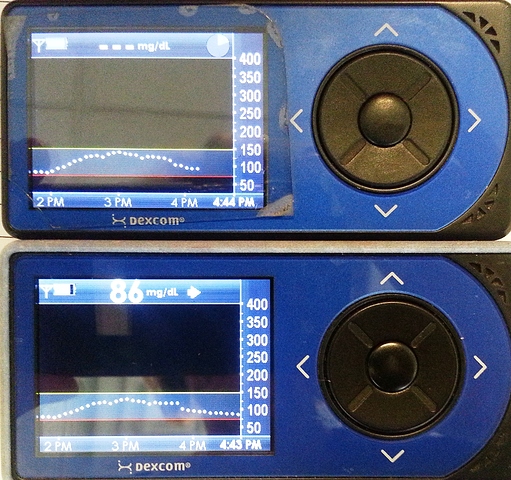 I chose to accept the warranty replacement as well. I occasionally run both receivers, this gives me the flexibility to take a receiver with me on bike rides, so that if I crash and damage the receiver, I know I have a backup in the truck or at the house.

it will only last another month or 2. I tried to extend mine but started getting ??? and unreliable results. if its covered, I suggest going for a new ne.

I would get the new one and hold on to the old one for a backup. I have had receivers fail, and even with Dexcom's fast service, it usually takes 2 days to get it. Do you really want your daughter to be without CGM for 2 - 3 days?

Thanks for all the input! I will be getting a new receiver!