Wondering what you think of this

I am just looking for some opinions but I know seeing a dr again would be best. I have been feeling super tired , dizzy , really hungry , ocassional sickly sweet taste in mouth and periods of blurred vision. Had blood tests done that all came back in normal range . HbAlc was : 34 mmol/mol. Is this low enough for a non diabetic to be considered hypoglcemic? I have heard low blood sugar can be precursor to type 1 diabetes . Only time i feel better is shortly after eating but then i feel terrible again soon after.

I have more tests results coming back next week . Just need to know what is up with my body already

Do you think so ? I have been feeling like this for weeks now. I thought if it were urgent my dr would be doing more mointoring but she just reordered some blood tests and took a urine sample neither of which I have results for yet.

I dont know much about blood sugar numbers so unsure if mine is cause for concern ? The symptoms point to low blood sugar to me but i have no idea really.

When do you expect to get those pending results?

Sometimes low blood sugar symptoms can be similar to high blood sugar symptoms, such as feeling tired and hungry. My mother said that my breath smelled like Fruitstripe gum when I was first diagnosed with Type 1, and I now notice a sweet taste when my sugar levels are running high. I’ve been told that hunger at high blood sugar levels is felt because your body can’t properly process the carbs (essentially starving you). Alternatively, it could be hypoglycemia, which would need to be managed in a different way than Type 1.

It could be something totally different also, but it’s definitely worth checking into it further. Perhaps, as Lorraine said, you could find out when you’ll get the results from your doctor. If it’s not for a few days, you could go into an instant clinic just to be safe. Your doctor may not realize how much the symptoms are bothering you. Calling their office may help emphasize that you’re very concerned and perhaps spur them to action in some way.

If it is Type 1, it’s incredibly important to start managing it as soon as possible.

Was told next week . Not sure when exactly. Ill update on here when i get them

Please do. I’d call on Monday.

Thats really interesting. The taste thing is the strangest ! Would be good to know whats causing it. I was told throat infectioms could also cause this sensation.

Thanks for your input. I will keep this posted once i find out more . I wish they did a finger prick test at the drs but i dont think diabetes is on their mind.

I am only 22 and a healthy weight so if it is the culprit type 1 would be more likely. There is no diabetes in my family that i know of (though that is nt saying much as my father was adopted so i dont know one side of my family history)

I can definitely taste it in my saliva when I’m running high, even when I’m not spilling ketones (which is what produces the fruity breath, which is different than that taste). I think it’s just excess sugar spilling into saliva somehow.

Do you know the normal range for your Hba1c result ?
Typically we see results expressed as mg/dl or mmol/l in the range of 4-14

Her A1c is normal (5.3%) according to this chart: http://www.diabeteschart.org/mtop.html

This is a system devised by the International Federation of Clinical Chemistry (IFCC) that’s in use in continental Europe. Here’s a conversion chart: 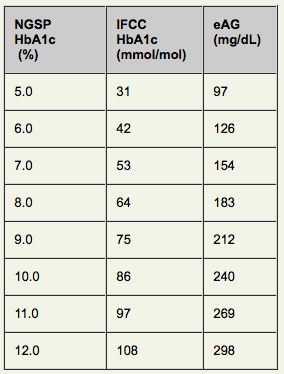 NGSP was originally called the “National Glycohemoglobin Standardization Program”. NGSP is the system we use in the US. Sometimes it’s referred to as DCCT, the system used in the landmark Diabetes Complication and Control Trial. The NGSP system was also used in the UK Prospective Diabetes Study (UKPDS), another landmark study from the DCCT era.

I’m type 1 and I had hypoglycemia 15 years or so before my diagnosis. Buy a meter and test yourself to see what is going on. I hope it’s not diabetes. For type1 go on insulin immediately. Is your doc running antibody tests?

Was going through my emails and saw some replies to this and realized i haven’t updated.

Very low blood pressure has been blamed for the blurring and dizzyness. I have been told to eat more salt and stay hydrated . After excersize and on hot days I really need to be mindful of it or I start feeling like I am going to faint or vomit .

I think I may be getting some kind of sugar crash as well because it seems to depend alot on when I have eaten but i am not being considered for diabetes . They have not tested antibodies though . The Dr said hunger can be cause by stomach acid issues too

My ck levels came back high . I will be getting more tests soon .

Very low blood pressure has been blamed for the blurring and dizzyness. I have been told to eat more salt and stay hydrated . After excersize and on hot days I really need to be mindful of it or I start feeling like I am going to faint or vomit .

You may want to ask your Doc if a full Cardio workup would be appropriate.
Low blood pressure can certainly cause these symptoms however that does not explain the underlying reason for the low blood pressure.

BTW - If you do feel like you are going to faint, be sure to sit down immediately. A significant risk factor with fainting is head injury from falling.

Yeah I am getting an ect (? think that’s the name ) next week . Dr thinks
seems to think a lack of salt in diet and naturally low blood pressure is
culprit . I’m hoping thats the case too .

You might want to ask about a workup for postural orthostatic tachycardia syndrome (POTS)/dysautonomia as well. I have that, and at first I thought it was postural orthostatic hypotension, but that turned out to be relatively more mild for me, but my heart rate temporarily skyrockets when I stand up (POTS), which causes a similar set of symptoms. Beta blockers have been helpful for me, but might not be prescribed if hypotension is the dominant issue. I hydrate more and eat higher salt, which also helps (especially in the summer or when I sweat a lot). A big part of it has also just knowing to get up slowly and be careful if I’m lowering my head when I lift it back up. Dysautonomia can also produce other symptoms related to sympathetic nervous system hyperactivation, like profuse sudden sweating, cold/pale extremities but feeling hot otherwise, upset stomach, and feeling very anxious if you don’t have any psychological reason to be. Some of it actually feels very similar to hypoglycemic episodes, and part of my motivation to treat mine was that I used to think I was low when I wasn’t because of POTS/dysautonomic reactions.

So i just very unscientifically lied in my bed and measured my heart rate
on my phone ( 60 bpm ) measured straight after standing ( 95 bpm ) .sounds
like I qaulify ? I know dr Google is no good but dang that description fits
me perfectly … will mention it to dr .

@Coco2 - integrate bp with that and time the positions for a good test.

Your heart rate (hr) and blood pressure (bp) are supposed to have a rise when you stand. It should not stay flat - that would be a problem. Likely a pretty bad problem. So there should be a rise but not much of a rise and it should stay elevated for a short duration but not too long of a duration.

The Doc can easily do a hr and bp test that does involve you lying down, then sitting then standing. It is timed in how many minutes this position and that position. Gives an idea. They can do this right in the office - no special equipment needed and no special training. Nurse, Doc, they all should be able to do this without blinking an eye.

The ECG (electrocardiogram) which you will be getting shows a short duration (maybe 30 seconds or a couple minutes) of electrical activity of your heart. If nothing of interest shows up, you could ask your Doc whether a Holter Monitor might provide more information. A Holter Monitor is quite similar to an ECG with the exception of the Holter Monitor recording for a longer duration. 48 hours is typical although the Doc can order whatever time duration they think would be appropriate. You wear it and go about your life. If you feel any “episodes” then you press a button and it places a “marker” on the data stream so when the Doc later reviews the data, they can see if any electrical activity of note was also occurring at that time. IMHO this is a nice test.

You could also ask your Doc if an echocardiogram (ultrasound of the heart) would be appropriate. This is also very non-intrusive and can be very helpful.

Note that ECG very specifically refers to electrocardiogram and NOT echocardiogram even though you might think it could go either way.

Whether these tests show anything or whether they show nothing - that all is great information to help your Doc to either come up with a diagnosis based on a result or rule many serious issues out of the picture based on no results.

It might be worth asking your doctor about adrenal insufficiency, which can cause low BP and low blood sugar.
The testing for it can be tricky, but there are hints in routine blood work and occasionally skin colour (more tan than might be expected for season and family skin tones).
Please delete if this is considered medical advice.

Yeah, you actually need to measure laying down for at least 5 min, standing and then some amount of time after standing (5 min? 10 min?). I can’t remember exactly how they tend to do it. As @Tim35 said, you should have a response to standing, but it should not be too extreme (not sure if yours is in that category or what the cut-offs are) and it should not be prolonged (mine stays as high 5 min later as it was immediately after standing). The most technical way to test it though is with something called a tilt table test, which is more complicated. Anyway, if you ask a cardiologist about it, they should be able to evaluate.