A Day With Fred

After over 60 years as a resident of London Ontario Canada, I finally got the opportunity to have a bona fide tour of the Banting House Museum here which is the house where Dr. Frederick Banting first conceived the idea to isolate insulin and use it to treat people dying of diabetes...which is what people with diabetes did back then. They died of starvation since everything they ate also helped to kill them. I'd always figured Banting was a great doctor and a great Canadian but thanks to Grant Maltman, the curator of Banting House, and a visit with our gal Nel from BC along with her hubby and family, we were all to learn a whole lot more about Fred, the man, an incredible man.

I'd like to share a few of the many details we learned on Thursday - partly because they're pretty fascinating (IMHO) and partly because my memory isn't all that great and I'll probably forget much of the detail before too long! Also my pictures were a bit disappointing so I only have a few that are good enough to share with y'all and I've posted them at my page if you want to check them out. But first, meet Fred...

It was a dark and stormy night ... I think. AT least it was All Hallows Eve, October 31 of 1920 and Fred couldn't sleep. He had agreed to give a lecture at the medical school tomorrow Nov. 1, on the subject of Diabetes and that was not a subject he was very knowledgeable about. Oh sure, he did ok at med school, although he didn't score well on exams. Exams just weren't his thing, but he was a hard worker and devoted to his career.

He had come to London Ontario to set up a practice all alone where he didn't know anyone outside of the university and didn't have any great inheritance to spend. He was just a poor farm kid from small town Ontario and his business acumen wasn't all that shrewd. Other young medics knew to join a booming practice to first ply their trade or at least take over for a retiring medic and have a client base to work with. But not Fred. He set up his little one room practice in this house on Adelaide Street and it was almost a month before he even saw his first patient... and that was just a fellow looking for a prescription for alcohol. These were prohibition years, so the local drunks had to get a prescription to keep their 'spirits'
up.

So he supplemented his meager income by giving lectures at the medical school across from Victoria Hospital also in South London and tomorrow was one of those lectures. It made him nervous to stand up before people and talk about a subject he knew but to have to recite medical minutia about diabetes, that deadly disease that was ravaging the world and forcing children and adults to die an excruciating death - well this was not his forte and not something he enjoyed, so he was nervous.

All day he had gathered up medical books and studied the subject of Juvenile Diabetes, as it was then called because Type 1 mainly affected young people, they thought. And while he tried to sleep that night he was mulling over the use of insulin for the treatment of diabetes and how it was never pure enough to work on a human pancreas and ended up being of no help at all. But what if... and he conjured up an idea that might prevent the impurities from entering the insulin and he got up to scribble himself a note... just enough to remember to look it up in the morning. The note is still on his desk in the bedroom in his scrawl.

Morning came, and he gave his lecture and then set about trying to prove his theory, which by now he was convinced would work. But he had to convince the people with money and resources and that took some time. He was young, after all. What experienced researcher is going to listen to the ramblings of a new young practitioner who didn't know much about diabetes until last November and couldn't even keep his own practice afloat! Eventually, he got some money and supplies and his all-important DOGS, and started to work at a lab in Toronto. Well the story continues and his first trial worked on the dog but the dog still died. The second trial worked and the dog lived and the news hit the presses PDQ. Other researchers were already involved and insulin was being produced in quantities to save thousands upon thousands of desperate people.

That's what the story was like coming from our curator guide, Grant. He knew so much detail and all the important bits as well, plus he was fun to listen to and obviously enjoyed his subject. I'd love to regale you with much more because there was sooo much more to that doctor besides insulin and being the youngest recipient (still) of the Nobel Prize and also the youngest and first non-American on the cover of Time Magazine in its inaugural year. He was also an astute painter who studied with A.Y. Jackson of the Group of Seven. He carved wood too and had some early war stories that would curdle your milk! But the part that left me most sorrowful at the end of the tour was Dr. Banting's untimely and possibly arranged plane crash at the young age of 49.

Ok, he looked twice that age if you ever saw pictures of him hunched over and his full length coat and hat making him look even older. He had a limp from a mustard gas experiment he had tried on himself at one time. It was fairly common then for doctors to try some 'easy' tests on their own person and he was fine with applying a little of the mustard ointment and the ice pack treatment on his leg - at least until he accidentally stepped near a lawn fire and melted the ice pack. The dose left a nasty scar on his leg and he was extremely lucky to have kept his leg when so many felt it should be amputated.

The plane crash that took his life in February of 1941 was a trip to England he was asked to make to further his work to combat chemical warfare and his earlier discoveries in the field of decompression suits for pilots who were now flying further and faster than ever before. The war in Europe was going strong and there were later cries of Sabotage when the plane's engines both quit while departing the Gander airfield in Newfoundland, Canada. The pilot managed to turn back to the airfield and shouted to his passengers to bail out while they were flying low and over shallow water. When he felt the plane lift up slightly from a sudden drop in weight, he assumed the doctor and associates had managed to jump out, but by then the plane was over land and he ended up crashing it into big ole Canadian pine.

But the doctors had NOT bailed out. They had thrown baggage out first to lighten the load, but were still in the plane when it crashed. And they survived the crash! The headlines wrote that they were MISSING and Dr. Banting was not found until days later, in the snow, dead. Apparently injured and disoriented (and cold) he wandered away from the crash site and was later found in a nearby field, frozen. 49. Imagine what he could have done with the other half of his life.

I hope I most of those details correct but I apologize if I'm off a bit somewhere. You already know I'm "off a bit" anyway :-)

This Banting House is a must see - especially for people with a connection to Diabetes and even moreso for Canadians. I'm embarrassed that I had only attended the museum to drop off clothes and other small donations like our own tuD poetry book "No Sugar Added". BTW, the poetry book was out on loan at the time we were there which means that people are reading it! Up until this week I had never done more than read some of the older displays and chat with some of the students working there in the summer. If it hadn't been for our own Nel visiting from BC and her pre-acqaintance with Grant Maltman, I never would have learned the "Rest of the Story" about Sir Frederick G. Banting, MD

Hi bikette. Fascinating! I have been to London to participate in dog shows (well, you mentioned dogs!), but I've never been to the Banting House Museum. I've never heard the real story of his tragic and untimely death. Those of us with insulin-dependent diabetes do in fact owe him our lives. Thanks so much for writing up this info about Dr. Banting.

Possibly the days of needing so many animals for medical research is coming to an end, thanks to our computers and "virtual" research. It's very true that pets with diabetes are living longer lives with diabetes, thanks to insulin. I'm glad to hear that Dr. Banting was compassionate to his dogs as well as his human patients.

wow! that is really interesting stuff! thanks for sharing. im naming my dog fred!

Bikette, I always took a few dogs! For instance, my avatar shows my blue merle Collie, Lacey, who got her CDX (Companion Dog Excellent) title in Canada, with me handling. A bunch of us from my area would go in our vans or RVs with dogs, camp from one show site to another (usually three). It was great fun except when it rained!

Great info, bikette. Thanks for taking the time to share it with us. Dr.Banting was a great man.

very interesting bikette, thanks for writing about it. say, wouldn't it be wonderful if Google honored Fred with a "doodle" on WDD? read about it here, and vote

A hot day in London and so happy to meet up with Ms Bikette ( who should write a book herself ). Please note her studded pink foot wear

a friend of mine had a golden lab ;his name was Banting (and loved our Rottie Bruce ) 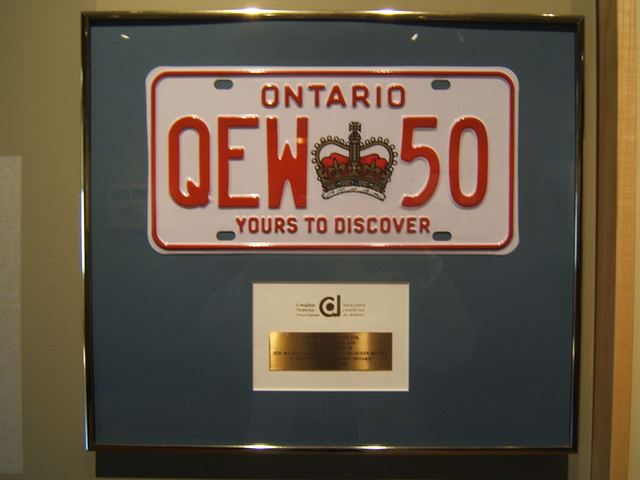 The story of the Flame Queen Mother took part in…license plate of her vehicle ; apparently Flame was vandalized and Queen Mother wrote a note to CDA ;note is displayed on wall

Today is Dr. Banting's birthday, so today has been recognized by the U.N. as "World Diabetes Day." Happy 121st Birthday, Dr. Banting! And, THANK YOU (and Dr. Best & Dr. Collip - who don't get the credit they deserve)!

Oh, and I’ve been to London too, when I was visiting a friend in Canada. Well, I think we just passed through and I didn’t have diabetes then so would not have been interested, silly me.

Banting and Best had tried their pancreatic extract earlier on Thompson, but all it did was create a huge abscess.

Brunetta - Michael Bliss also wrote a great book called 'The Discovery of Insulin' - I think he wrote it before the Banting biography. Both books are really well written, and the Canadian Broadcasting Company came out with a mini-series several years ago based on them. It's called 'Glory Enough for All.' I think you can find it on YouTube or something in about 16 parts.

It's a truly fascinating story - I think it's safe to say that Banting hated MacLeod - he almost refused to go to Stockholm to accept the Nobel Prize because he would have to share the prize with MacLeod.