How do I know when I need a new transmitter?

I am just reaching the six month point of my CGM… How will I know that my transmitter needs to be replaced? Thanks for the help

Here’s a screen-shot from page 145 of the Dexcom G4 Platinum User Guide: 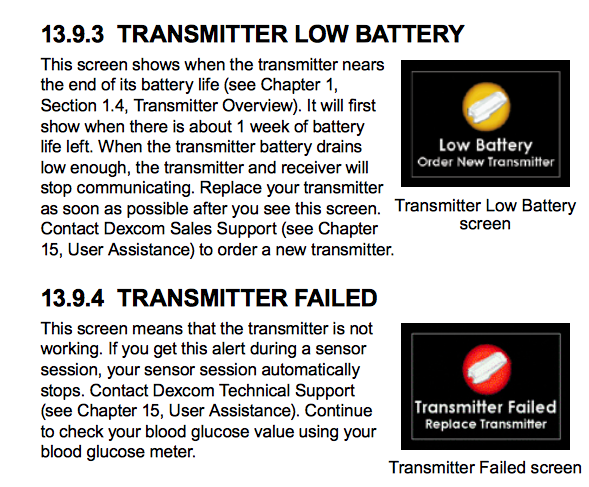 I’ve been getting about 9 months on my G4 transmitters. I’ve seen other people report getting 12 months or more. The key thing to note here is that once you get the warning you will only have about 7 days to replace it. I like to have an extra one on hand so that when the transmitter fails I’m not dealing with Dexcom and insurance issues while I’m cooling my heels without CGM service. When I become insurance eligible for Dexcom equipment and supplies I usually place an order.

My current transmitter is coming up on 12 months old. Lately, I’ve seen more ‘signal loss’ errors on the receiver than I’m used to seeing. Not sure if it’s failing yet or not - the status still reports that the battery is OK,. Thoughts?

@Thas seeing a signal loss is exactly what happened for me this morning… for no apparent reason. I waited about 10 minutes and, when it hadn’t returned, I restarted the sensor (engineer logic my hubby taught me… always restart first

) So, now I a waiting the two hour recalibration period.

@Terry4 Thanks for the images! I called Dexcom to place an order for a new transmitter, and asked the fellow I talked to how to know if the error message I was getting indicated the transmitter battery was gone, and–true to the logic of capitalism–he instructed me to replace immediately

So, I order to have one on hand as you suggest…and restarted. I would love to eek out another three months!

I do wonder what the factors are that would cause the battery to run low sooner than later.

Well, that didn’t work… so next step–replace sensor. I did note that the tissue around the sensor needle was raised relatively high aka more than usual so I speculate that inhibited the ability of the transmitter (I usually go two weeks per ach sensor–this day 11). We’ll see.

Point of irony–when I met my husband, the software engineer, I was a practicing psychologist who functioned by intuition and had not a logical/linear thought in my head

He’s rubbing off on me

I’m not sure that’s an indication of transmitter signal strength based on a marginal transmitter battery. Are you referring to data dropouts (missing 5-minute reports), increased ??? frequency, or inaccurate data?

There are other pertinent factors in this system, most importantly the sensor/interstitial fluid/enzyme interface. I noticed a smoother line when I concentrated on drinking more water. It could be a coincidence but adding more water to the system would make sense to me. The sensor lives in the fluid between fat cells. It generates an electrical signal due to the interaction of the enzyme placed on the sensor tip with the fluid between fat cells. I’m not an engineer, just an interested observer with a background in electronic tech.

@Ahnalira, I think some of the above issues could produce the symptoms that you and customer service may be misinterpreting as a marginal transmitter battery situation. I’m guessing that the “low transmitter battery” warning is set high enough so that before that warning the battery is plenty healthy. This is speculation on my part. I think it’s smart to have an extra transmitter “on deck.”

By the way, I don’t stop and start the sensor to relieve these symptoms. I either wait it out or replace the sensor.

Breaks in the data - not ???. And I know that irregular or inaccurate numbers usually are sensor- related. The G4 receive usually gets pretty solid reception from the transmitter, but lately, it seems less consistent. Interestingly, I wear an Animas Vibe and its receiver seems to have fewer of those breaks in reception than the receiver - of course, when I’m carrying both.

@Thas, you’re saying that the Vibe can “hear” a data point while the Dex receiver doesn’t “hear” it. That would suggest that the receiver was in an unfortunate orientation to receive that signal. Or it could just be an anomaly in the radio frequency environment. If we could see radio signals, I’m sure a lot of our real world perception would be very obscured. When I studied radio transmissions and antennas, the instructors often made reference to a “black art.” I gleaned from that that we don’t completely understand how radio frequency transmission and reception work.

There’s another factor that can play a role but would only apply if both your Vive and Dex receiver missed a data point. It’s the connection from the sensor to the transmitter. Those are the round black soft pads in the sensor shoe that the round metal surfaces on the underside of the transmitter seat against. I’ve read many reports and also experienced data dropouts after showering or spending time in a hot tub.

Yeah… I understand radio theory, too (Amateur Radio operator). My assumption has been (to this point) that the Vibe, by virtue of it’s (tubed) tether is forced to be a set distance from the transmitter, whereas the Dex receiver has more “play” room. Problem is that, for instance, yesterday, the Dex couldn’t hear the transmitter periodically from across my body - Vibe was on the same side… So I moved it; however, overnight, the Vibe slipped behind me while I slept and never missed a beat. My guess is, therefore, that the Vibe has a slightly better antenna than the receiver. Still, last month, the receiver did not have a problem under similar circumstances, and now it does…

I guess I keep watching until I get tired of that and open the new transmitter that’s been on the shelf for a bit… The one I’m using is still the older, “fatter” one, anyway…

It’s hard for me sometimes to calibrate my level of detail when I’m not familiar with what the reader knows. Sorry if my words came across as pedantic. I wasn’t a ham but I did work with avionics systems for 25 years. I know enough to be dangerous!

I once left my Dex receiver aboard my boat and then got engaged in an extended conversation with someone on the dock about 50 yards from the receiver. When I got back to the boat I was expecting a 20-30 minute data dropout. The receiver didn’t miss one five-minute datapoint. I was amazed.

I also use a FitBit activity tracker. It talks to my laptop through a Bluetooth connection. Sometimes the laptop cannot hear the FitBit until I turn off my iPhone bluetooth signal. Sometimes RF baffles, sometimes it amazes.

No insult taken. It’s just one of those things, I suppose. Wish I had a meter on the right frequency so I could measure the transmitter’s output, but alas, I have to work with somewhat unreliable measures.

Your dexcom supplier will tell you when you can order your next one according to your insurance. It is usually before the transmitter/receiver battery will fail. They told me it’s good to have it ahead of that because once it starts to fail you only have 3 days before it goes kaput, or something to that effect. If you put the transmitter on homeowners insurance you can get it replaced if it is damaged from water or something like that.

If you put the transmitter on homeowners insurance you can get it replaced if it is damaged from water or something like that.

What a great idea! Thanks