How to restart G6 transmitter?

I tried my arm but it was painful and had to get help to get it off me as I could not insert it properly, older one. Then did abdomen and then legs. All had the same issues. My abdomen was too painful for Dexcom and that is where I sometimes put the pump so I was not going to put both of them there and damage my skin even more etc.

Let’s face it we have limited areas we can put all of this stuff. I would still like to try the one that goes under your skin completely but I don’t think that one’s covered at all by my insurance and it’s a lot more expensive.

My cde gave me a sample libre 2 to try as she did not have the 3 samples. But none can be calibrated. I tried libre 1 she gave me 2-3 years back. It was useless cause inaccurate and no calibration and no warnings or continual alerts etc.

Although I did not have trouble inserting it and did not have terrible irritation I did have a big bruise on my arm after. But I’m not really a fan of putting it on my arm, it is more likely to have pain and if I end up with the severe irritations I have elsewhere my arms are gonna look hideous at least where I put it now it’s not going to be visible most of the time.

If the accuracy is just the same it really makes no difference anyway.

maybe flex fit tape or iv3000 first, then tricep… the g6 insertion is a lot easier than the g4/g5, so maybe try the arm again…the libre 2 could work with xdrip, jugglucco, but for me the dexcom on the arm still seems more accurate than the libre…Eversense is still my favorite, most accurate, especially hypo/hyper recovery times, but drinking lots of water will also help the g6 recover, and Eversense can be difficult to find a willing dr…many more insurance companies in the us are starting to cover it, so it might be worth it to call them regarding coverage

Is eversense the one under your skin? I believe so. I am going to contact them. I called them a month ago and someone called me and then they said they were going to call anymore cause I never responded. I don’t know if my endo would do it or not I have to ask them.

When did you use that and how much more accurate was it for you? When I looked at that I was a little concerned that the sensor thing seems to attach with a magnet or something and you have to put tape over it because putting any type of stuff over it eventually can lead to severe irritation I’m going to include a picture here of my last inset which I use the new adhesive stuff that I bought which is like IV 3000 so it doesn’t really seem to matter how good they seem to be for other people it doesn’t make any difference for me.

I didn’t feel that it was bothering me that much until I removed the dressing last night and there were two huge red welts at the edges and then it became very inflamed and very itchy so I had to put clobetasol propionate foam twice.

One of the worst reactions I’ve had to anything was when I was wearing a heart monitor for a couple of days. I got a very severe red, very painful and itchy rash to the point that it was so bad that I had to just take it off and stop doing the monitoring 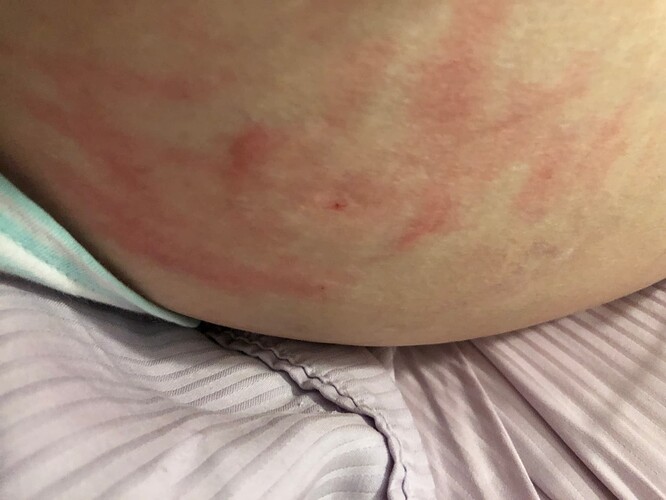 Eversense had a pre covid 2018ish promotion where they had groups of representatives and regional managers all helping to have more drs, nurse practitioners, and physicians assistants install the sensors…they also had teams working with insurance companies and prior authorizations, the promo helped, and it is covered by many more companies, but the healing process is long, about a week for insertion and a week for removal and 3 months is too short…6 months is now approved, however, they have the year sensor in fda trials, and the price should be somewhat competitive with dexcom/freestyle libre then…the rechargeable device is really just a Bluetooth transmitter that sticks on with a silicone sticker that lasts at least 1 day…the device has to be charged daily and the insertion/removal can be difficult, as your body attaches itself to the sensor…however, many people who normally had allergic reactions to other sensors did not have them on Eversense… they do recommend calibrations, but my calibrations were usually within 1 or 4 mg/dl, where dexcom can be a little off especially if its a restarted sensor, and the libre was often ±50 which is just ridiculous

For me dexcom can be 50-100 points off. Libre was the same and no calibrations.

I will look into ever-sense but I wonder if it could still cause issues for me and a week is too long and 3 months way to short. No way I want to have to it even every 6 months but will leaving it in a year be ok. No way to know unless you try it. I worry about anything attached to me even silicone etc. and worry about it falling off and losing it.

You would think in ten years or so since dexcom they would have come up with something better. Eventually dexcom will not be able to block others using their tech and maybe it will get better and cheaper.

Eversense would be a great option, but they require calibrating twice a day. Unless they over came that very recently.

It’s also a bit invasive. Your doctor has to put it in and also remove the old one,which has to be cut out.

If it were accurate and didn’t need calibration, and if it would integrate with my pump, I would be all over it even with the extra invasive nature of it.

You still need to wear a transmitter over the site. By the way

i was able to make it work with xdrip, which will work with aaps, but like most cgms, a little diy nightscout makes worlds of difference

I have never tried any of those, maybe one day I will.

I still calibrate dexcom as needed so it is not an issue and I still finger-stick for insulin dosing etc. as do millions.

I’m not sure about having it inserted, how bad it is, there’s no way to know unless you try it. I’m aware of the transmitter having to be attached/ taped over etc. that is another concern I have because it’s only held on with silicone apparently so it could fall off and either way irritations can be an issue.

There is no way to test it without paying for it etc. so who knows. It does seem to get good reviews from a lot of people.

If it is only done once a year or every six months maybe and it’s not that bad. The other issue is my body could have a reaction to it even though it’s under the skin etc.

if you are seriously considering Eversense, try calling them and explain your allergic reactions to the other companies’ adhesives… they will probably send out at least 10 stickers for you to try…if it works ok, then look into an android/Google wear watch, xdrip, nightscout, aaps, etc

I got a fake one from a trade show. Basically double sided tape and a transmitter. It felt a lot like a dexcom. You can peel it off and stick it back on which was a nice feature.

My dexcom makes insulin decisions all day long so I hardly do finger sticks unless it doesn’t feel right. It took me a long time to give up doing that.

I put my new sensor at bedtime and I do a fingerstick when I wake up, it’s usually pretty close. Other than that I just go with it.

I will call them when I have time and ask them what they think I also have to see if it would even be covered under my insurance etc.

You are lucky that it is accurate enough for you to feel safe do that. For many like me it isn’t. I was always amazed that they managed to get FDA approval to use it to make treatment decisions because I would never do that.

If I did I would be dead by now for sure. But anyway it only takes one really off number and one treatment decision to get you into a very serious situation which can happen to anyone.

i still think the Eversense would be worth a serious try, cigna recently added it, as well as many other east coast insurance companies. i think your Dexcom and libres give erratic readings stemming from contraindications… i remembered going from the Eversense to the libre with miaomiao and having readings that were 50+ mg/dl off the meter, and thought maybe the tooth antibiotics and ibuprofen affected the readings, and as soon as i was off of them, it went back to normal…i think any additional medication can easily throw both the Dexcom and libre off…Dexcom does ok with acetaminophen, but they probably altered the algorithms, and now naproxen sodium, ibuprofen, aspirin, antibiotics always have contraindications… sad

When the dex goes wonky it usually stops giving data. I’ve seen it off by 20 or so, but I chalk that up to the delay in food getting to the interstitial fluid.

When I’m fasting even when I wake up it’s usually pretty exact. Because I’ve drawn a flat line for hours.

At the times when I feel low, my dex is either alarming or is close to the edge. Because I’m on a loop, I can ignore it and it generally self corrects. If I get the dreaded 55 alarm I will go ahead and eat something.

I didnt get really good results until I started wearing it on my arm.

My dexcom has trained me to understand how long it takes for insulin to hit my blood stream and how to dose carbs. How to understand exercise and fat consumption.
It goes far beyond just giving me my current glucose and trend.

I think I have already said here what the issues are for me, no point really rehashing it anymore. You sound like a commercial for dexcom actually

They would never let me make a commercial because I would make clear that for me it can go from being dead on to being totally wrong by margins that are not safe to bolus off of etc.

As said above I tried dexcom everywhere and my legs were the only best alternative but it didn’t change the very bad results for me. We all have different experiences and issues with all of these devices, just becasue it works for you etc. does not mean it works the same way for everyone else.

It works for some not for others. Also I don’t care how well it compares to my fingerstick.
You could try the new Medtronic’s sensor. I hear it’s much better.

I would not try it because I have a tandem and just finally I hope, I am not totally sure yet, got the dexcom coverage nightmare fixed. But if they gave me samples for free maybe. However sensionics might be worth trying if it is more accurate for me, but no free samples for that I am sure.

Hi there meee - have you tried Skin Tac? I find that really helps with stopping the sensitivity problem that I have. Been horribly allergic to the adhesive for quite some time, get the same results as in your photo. These are the steps I take:

Not sure if you’ve tried Skin Tac but it really works well for me. Solved my allergy and sensitivity problem very, very well.