I’m completely new to all this. My daughter has been acting a little outside of her normal behavior for a couple of weeks. She complains almost daily of headaches and also feeling nauseas. She says she always feels tired. She told me that even though she eats (she eats well and is 72lbs/ almost 11yo) she is always hungry and thirsty. She isn’t drinking a ton (but drinks enough) though because she said she doesn’t feel like getting more water. I took her to the dr last week because I actually thought it might be low blood sugar or anemia causing her to be tired. He ordered a CBC and BMP. Her results came in yesterday evening. CBC was really good. Her BMP was a little out of normal. It was a fasting test. Her BG was 130 (top range was 99 for testing), her potassium was 5.1 which is as high as it can go without being too high. Anion gap was high normal at 10 and creatinine was low but I read that’s normal and she is skinny. I bought a home BG monitor and yesterday she was in the 120’s after eating at the two hour mark. This morning she was 145 at the 1 1/2 mark after eating breakfast. We still haven’t received a call from the clinic about the results. I’m a little concerned. There are so many different variations of normal and abnormal online that it is hard to tell if i’m just being paranoid. No family history of type 1 or 2. We eat rather healthy… don’t drink sodas. Is it possible she is a type 1 but not full blown? are the other labs usually correlated with type 1?

I am not a medical professional but have lived with T1D for a long time. I’ve also done a lot of reading about diabetes. I don’t think any of your daughter’s blood glucose numbers are much outside the range of the non-diabetic population. The fasting number of 130 mg/dL does exceed the threshold of 126 mg/dL that would cause many clinicians to investigate further. I would request an A1c blood test if it has not been done already.

It may be possible that your daughter is in the early stages of type I diabetes. But her blood glucose numbers may be a little high due to some other reason. I think it’s a good idea to use your home BG monitor at various times, both fasting and post meals. What does the doctor think?

She saw a nurse practitioner and he hasn’t called us back. So, I should ignore the lab ranges where 99 is the highest for normal?

Also, post meal would 145’sh be high for a non diabetic child? thanks for the info!

So, I should ignore the lab ranges where 99 is the highest for normal?

No, I wouldn’t ignore that number and would request a repeat test. You may want to ask for a referral to an endocrinologist as they are the specialists who care for people with diabetes.

Here’s the range of fasting blood glucose numbers as cited by the UK charity, Diabetes UK:

There are other diagnostic criteria to diagnose diabetes and this fasting test is only one of them. Others include the A1c number and the oral glucose tolerance test (OGTT).

Also, post meal would 145’sh be high for a non diabetic child?

I believe that would be high for a non-diabetic child but I can easily envision some non-diabetic children ranging that high after a high-carbohydrate high-glycemic index meal like breakfast cereal, milk, and fruit. Again, I am not a doctor, just an educated lay-person.

You’re right to take these results seriously. Intervening early in type I diabetes is desirable. I would want to see an endocrinologist, preferably a pediatric one for your daughter.

Thank you so much for taking the time to explain this to me. I was also concerned about the potassium as I know that is very important concerning heart and anything out of normal should be looked into. I read that with DKA sometimes the potassium will be elevated. Since my daughters is at the highest end of normal it concerns me that she may be going that route. I do feel a little silly at times worrying but then I feel that maybe something really is going on. she ate about an hour ago and now she has a head ache. this is becoming typical for her. 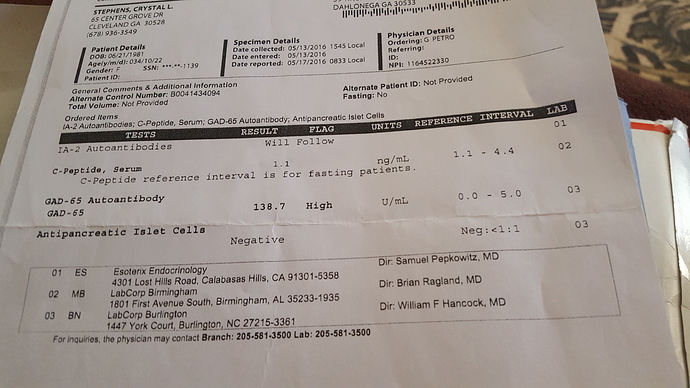 The nurse practitioner called back and wants to do an A1C and also urine test. He’s going to speak with the doctor about it.

I certainly cannot say whether your daughter has or is developing diabetes. I can say that I have 2 non diabetic children and have checked their bg in the past and have gotten some readings above 120. It definitely raised an eyebrow, but ultimately did not develop into anything. Good luck to you guys. Keep us posted!

None of those numbers ring loud alarm bells, but some are high enough to warrant further investigation. That 145 is at the high end of the gray area; further testing is just smart and prudent.

As mentioned above, there are many things that can produce elevated blood sugar and many of them are temporary. Steroids, for example. I’m not suggesting that’s the case with your daughter since I presume you would have mentioned it. Just saying there are lots and lots of possibilities and not all of them indicate diabetes.

That potassium number definitely warrants attention. That’s one I’m familiar with because I struggle with it myself. As with blood sugar, there are a lot of things that can influence that number. Diet is the main but not the only one. Some blood pressure medications can elevate potassium levels if you’re not careful with the dosage. Again, I’m sure this doesn’t apply to your daughter. Just as above, there are many possible causes. So do investigate.

In the event that your daughter does turn out to be diabetic, it certainly is a major adjustment. However, if that does turn out to be the path she is on, realize that she was fortunate to be born at a time when the tools allow a diabetic to live as long and productive a life as anyone on the planet. And they’re getting better all the time. Also, in the event that things do break that way, you have an enormous reservoir of support right here, including parents who’ve been down that path before you, know where the bumps are, and are eager to share.