For those who are able to maintain standard deviation in the 20 s, what is your best advice? This request is prompted by seeing Dr Steven Ponders of Sugar Surging fame, 30 day report.
I don’t think he is low carb and I want to have some food freedom and eat fruit and nuts and beans etc. However, the mindset is tough for me to maintain a low SD. Ideas welcome especially without food restrictions.

However, the mindset is tough for me to maintain a low SD.

Obviously easier with a pump. 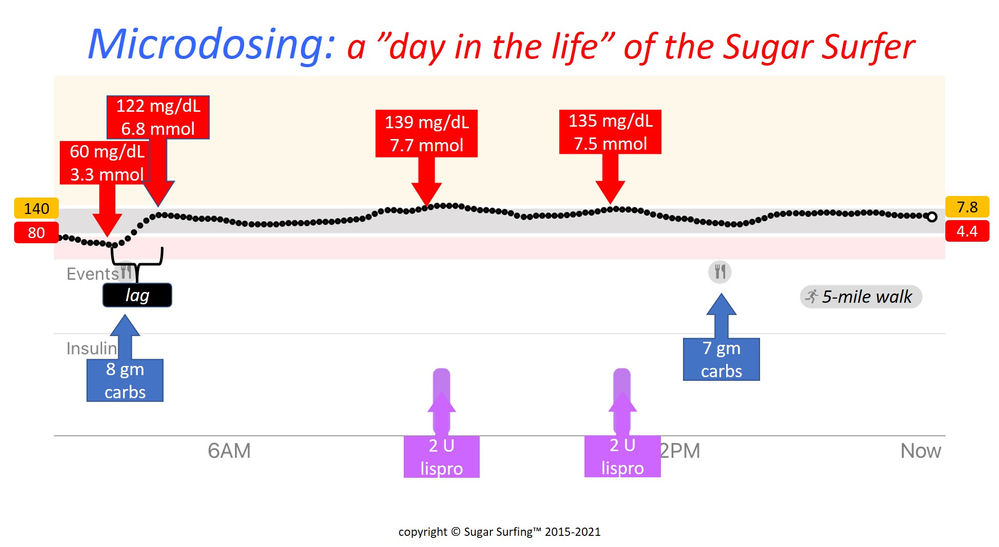 Lesson #21: Microdosing. It's just a "day in the life" of the Sugar Surfer.

Stephen W. Ponder MD, FAAP, CDCES 2018 ADCES Diabetes Educator of the Year Over treating a low blood sugar can be frustrating. It starts a glycemic roller coaster that can take hours to stabilize. Sugar Surfing™ approaches the correction of lows by...

For those who are able to maintain standard deviation in the 20 s, what is your best advice?

Eat, dose (including meal pre-bolus), and exercise based on your CGM. It can be done with just a BG meter as well but it is not only much more difficult to get the results you are looking for, but will greatly limit what you can eat.

Dr. Ponder uses MDI and not a pump. Quite amazing what he does.

Thanks that is very helpful as I have both CGM snd pump. I also have FOTF which I have yet to master.

But I’m not spending all my time careening off the guardrails, I also have 40 years experience of learning how to handle every common and uncommon situation with respect to exercise, food, and insulin.

I would hazard a guess that SD in the 20s would for most mean TIR at 97 percent or better? TIR seems like a more approachable goal than SD.

90% or better TIR seems like a much more approachable goal to me than SD in the 20s.

Say I’m averaging 120 and my bg at the moment is 80 and flat. That’s a deviation if 40 and I go I wanted to “correct my deviation” to be in the 20s or better I would have to go munch on some glucose to raise my bg. That just doesn’t seem like the right response to an 80 that’s flat.

I guess really I need to focus on CV to keep it as small as possible to keep SD from being 20s but at a high glucose… make sense?

I have a few non-food limiting suggestions but they all pale in comparison to the carb-limiting way of eating that I choose.

Here’s what I suggest:

What I’ve learned about managing glucose is that the often unpredictable factor is changing insulin sensitivities. It’s as if the field on which you compete is pitching and rolling at an unpredictable rate.

I do not restrict carbs, but I do eat in a balanced manner. I usually come in around 100-150g a day. Less than the typical American, but way more than a low-carber. I eat bread, beans, fruit, pasta, pizza, desserts, etc… But everything is homemade from scratch and everything is balanced with lots of protein and veggies, which doesn’t leave a lot of stomach room for going overboard on the carbs.

I’m the first to admit that I’m not a role model diabetic. I’m terrible at pre-bolusing. Half the time I forget to bolus until my high alarm goes off at 140. I never count carbs (nothing has a nutritional label on it when you grow much of your own food and cook from scratch!), but rather guesstimate. I love the idea of sugar surfing, but I suck at that too… It just doesn’t line up with our homesteading lifestyle. We eat when the chores allow and the food is ready, not when the BG is behaving appropriately.

The thing that has made a world of difference for me is pump automation, specifically Tandem’s Control-IQ running in its “sleep mode” all day (unless I switch modes to accommodate for higher activity). Sleep mode targets BG of 110-120, so nearly constantly adjusts my insulin to try and keep me there… No matter what I’m doing, or failing to do. It accommodates for a lot of my bad behavior. Even though I forget to pre-bolus all the time (or heck, bolus at all until after a meal), it’s already giving me some of the insulin I need. I still need to bolus, the automatic delivery in sleep mode is too slow/incremental to be a full substitute for bolusing, but it buys me a lot of extra time.

I also do a lot of “super bolusing”, meaning intentionally over-delivering too much insulin, and trusting the pump’s automation to suspend basal delivery later. It essentially takes that annoying lingering tail that keeps you falling 2.5-5 hours after a bolus, long after all the carbs have been absorbed, and diverts it to be used as basal instead. The theory is that you can safely add up to 2 hours worth of basal insulin to any meal time. No stacking, though, if you take more than one bolus per mealtime! My basal runs just under 1 u/hr most of the day. If I eyeball my plate and guess it’s worth 5 units, I will actually deliver 7 units. I get all the insulin I need, when I need it, and then the pump suspendeds my basal when it figures I’ve got too much left on board.

It really starts to blur the lines between what’s basal and bolus insulin, though. I suspect those terms are going to become obsolete in the near future as these predictive and reactive systems become more commonplace. It’s just about the insulin you need, and no designation necessary whether it’s to cover glucose (from food) or glycogen (from the liver).

Like I said, my personal behavior is terrible… But my end results are awesome. At least I’m pleased with them, even if I can’t compare to many others here. I run around 98% TIR 70-160, some days worse but there’s lots of 100% days too. My estimated A1c runs 5.4ish, but my bloodwork comes back at 5.8ish. I’m definitely a rollercoaster, but at least it’s a tame kiddie coaster.

Very helpful… I will limit carbs some but not strictly as Ponder does so well even with large amounts… I hope to learn from him as well as others… if I must to achieve my goals then I will do it.

If I eyeball my plate and guess it’s worth 5 units, I will actually deliver 7 units. I get all the insulin I need, when I need it, and then the pump suspendeds my basal when it figures I’ve got too much left on board.

I do basically the same, since I switched to Tandem X2, and use sleep mode 24x7.
I use xdrip, which shows SD and in range % (for current day or 24 hrs) although I rarely pay attention to it. Occasionally go to stats screen to see data averages/estimated A1C over time.

I think getting higher % in range is more important, with SD showing if there is possibly room for improvement to hit more optimal range.

I have to agree paying attention to TIR is more important than SD. I never paid attention to SD until someone was talking about it and I checked it. I think with staying in your TIR as much as you decide is your goal that the SD falls more into line.

I don’t limit my carbs or what I choose to eat (as a vegan) but I am probably between 100-150 carbs most days. I also do a lot of eyeballing and guessing at carbs. I am not the measuring type person. It has worked for me as my TIR is 98% between 70-160.

I have to agree paying attention to TIR is more important than SD.

I think this is true as well but with slightly different reasoning. Time in range is a great summary statistic in that it incorporates lower glucose variability, minimizes both hypers and hypos while it also lowers the average glucose level.

This effect is more pronounced when you squeeze the 70-180 range down to a more desirable level, like 70-140.

I think paying attention to SD and CV (markers of glucose variability) is worthwhile. Fortunately, if you only focus on TIR, especially one reduced from the overly generous 70-180 range, you will also benefit your glucose variability measure.

I have personally found that SD < 30 mg/dL is when I feel best. Things feel perceptibly better when it falls to 20 mg/dL. I think the best way to reduce glucose variability is by focussing on TIR and squeeze that range down to a more challenging range like 70-140. If you’re already achieving 90-100% TIR, 70-180, why not narrow that range and make the game more challenging?

My brain is my single best ally in managing blood sugar levels. Adopting a narrower range for my TIR goals subconsciously recruits my brain to make that happen.

It’s similar to the circumstance when you struggle to figure something out and decide to put it on the back burner. Then, while not directly thinking about the problem, your brain works in the background and gives you an effective insight while you’re doing something else, like showering. I think framing your diabetes management goals in desirable, yet still reachable ways is important.

An average non diabetic has a delta of about 60.

My time in range is usually close to 100.
I’m not sure we really need to keep it in the 20s. I would like to see data on it.

An average non diabetic has a delta of about 60.

What does this mean? Are you trying to say that the average non-diabetic’s glucose is limited to a range of 60 mg/dL?

Your writing confuses me. I understand that your TIR is 100% but then you question if we really need to keep it the 20s. At first I thought you were referring to TIR but then realized you were likely talking about standard deviation, but it was not clear.

I do think that data-based decisions are better informed than just going on gut instinct, especially for researches and academics who offer advice for a population. I’ve found, however, that n=1 experimentation can deliver some great tools for managing my blood glucose. I do need to exercise some common sense and not try tactics that are dangerous or unhealthy.

Why don’t you experiment with reducing your glucose variability to a standard deviation in the low 20 mg/dL range so you may compare it to how you feel with a higher SD, like 60 mg/dL?

I find the quality of life with a SD of 20 mg/dL much better than how I felt when glucose was swinging with a 60 mg/dL SD. I felt more energy, cognitively sharper, and sense of well-being all superior when my SD is lower.

You can wait for the data, but wouldn’t it just be simpler to try it yourself? Or perhaps what you’re really trying to say is that you don’t think the potential benefit is worth the effort.

This is so true. I used to think TIR with the 70-140 parameters we’re impossible… now I am slowly moving time in range percentages upwards. I am slow to change at my age and stage of type 1 but it is happening. Thank you for the helpful comments. I do appreciate people being willing to share!!

What does this mean? Are you trying to say that the average non-diabetic’s glucose is limited to a range of 60 mg/dL?

Non-diabetics are using diabetes technology to track their blood sugar and...

‘I think the value is unbelievable,’ one entrepreneur told MarketWatch.