I’ve been absent from blogging for the past few weeks, mainly because I was feeling a bit burned out by all of it and needed a vacation from blogging. However, that doesn’t mean I’ve tuned out, only that I chose not to write about anything. I have a few topics pending, one of which I am writing about today: the election and the topic of healthcare.

If you listen to policy wonks, the topic of healthcare has fallen down on the priorities for both Presidential candidates, as the economy takes center stage. That theory suggests that any serious healthcare reform is unlikely to occur regardless of who is elected as president. In the second debate between McCain and Obama, Both candidates vowed to make health care reform a top priority in their first year in office.

Robert Laszewski, who writes the health policy blog Health Care Policy and Marketplace Review says the chance of seeing major health care reform in 2009 or even 2010 is now “exactly zero.” He also faults both candidates for their failure to acknowledge this economic reality.

“They were asked about it [in the second Presidential Debate] last night and they were asked at the first debate, and neither one would admit that major reform is off the table,” he says. “They need to be made to answer the question, ‘If you can’t have major reform, what will you do?’ By letting them off the hook, we have no idea what the answer is.”

Ironically, this is set against a backdrop of slow but steady increases in the percentage of Americans who are uninsured (even more troubling is the fact that over 80% of the uninsured come from working families, with more than 70% having at least one full-time worker in the family). On top of this growing burden, very rapid increases in the cost of coverage have occurred even for those who actually have coverage, making it harder and harder for U.S. businesses to sustain this growing cost burden (which helps explain the decline in coverage). A seldom acknowledged fact is that GM, Ford and Chrysler now manufacture more automobiles in Canada than they do in Michigan (a state candidate McCain has for all practical purposes already conceded to rival Obama), and this is mainly because the healthcare coverage is paid for by the Provincial government in neighboring Ontario, Canada whereas the automakers are forced pick up that huge cost themselves for their workers in Michigan. 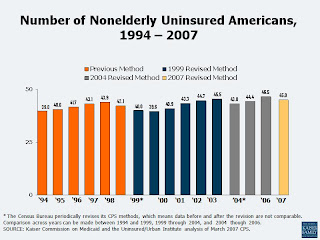 Since 2000, the number of nonelderly uninsured has grown by one to two million a year—with the only decline in the number of uninsured occurring in 2007. The number of uninsured Americans increased as rates of employer-sponsored insurance stalled or declined. Growth in Medicaid and the State Children’s Health Insurance Program (SCHIP), along with increases in Medicare and military-related coverage, largely accounted for the decrease in the number of nonelderly uninsured in 2007. (Last year, President Bush vetoed a $35 billion bill passed by Congress largely over SCHIP; the revised plan is due for Congressional renewal in March 2009). 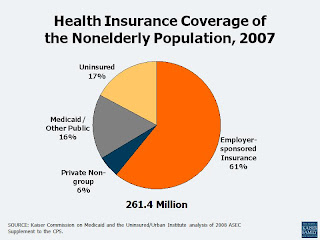 The Kaiser Family Foundation has a large number of statistics on the subject of healthcare, coverage and costs, but the basic facts are inescapable: time is running out for politicians to do something about this issue, as we will soon reach the point where a MAJORITY of American workers do not have employer-provided healthcare coverage (as of 2007, 61% had employer-provided coverage), but at the rate these statistics are changing, that that could be reversed in the not-too-distant future, and a recession could accelerate that trend).

Until a few weeks ago, the main argument has been that the U.S Government cannot be trusted to run a healthcare plan (even though we insure all retirees via Medicare and some low-income workers through Medicaid). Critics say that we should rely on private enterprise to run these plans. However, as I’ve written before, some countries do just that while also providing universal coverage: Holland is one such country (see my previous post on Holland as a potential model).

But an interesting thing has happened, and that is that all of the free-market, no-regulation advocates have effectively shot their most compelling argument against universal healthcare in the foot. They have done so with the recent $700 billion bailout of financial institutions and the government takeovers of Fannie, Freddie and AIG. In effect, the United States has become the world’s largest socialist country under a Republican President, with bipartisan support from Republicans and Democrats in Congress with outright ownership of these companies, and we could see this government role expanded with large ownership stakes in banks as the Government takes stakes in Goldman Sachs, Morgan Stanley, J.P. Morgan Chase, Merrill Lynch, Citigroup, Wells Fargo & Co., Bank of New York Mellon and State Street (see the front page of today’s Wall Street Journal if you’d like more details on that element of socialization).

In the words of Chicago Trubune editorialist Ezekiel Emanuel, “it hardly seems credible to criticize health-reform plans as socialized anything” in light of the nationalization of these institutions! If we can bail out Wall Street, why the hell can’t we nationalize healthcare? Not that I expect to see that happen, but we CAN throw this massive bailout back in the faces of these pseudo-capitalists who argue we cannot have nationalized anything when they make these claims!

The Wall Street Journal Health blog did an excellent job of summarizing the argument, and I won’t attempt to replicate their work, instead, I’ll refer you to that posting at http://blogs.wsj.com/health/2008/10/13/why-the-sick-economy-makes-health-reform-more-plausible/. Of course, this has not addressed the massive (and growing) number of Americans with chronic healthcare conditions (including diabetes) who are all but uninsurable under the McCain healthcare plan (many of his elements were addressed in a previous posting of mine, see here for details on that), but don’t think that Obama scores all that much better on this subject. His plans are vague and nonspecific on so many items that need to be answered, yet he has failed to address anything other than promises of hope.

The main issue now is that we all know that the U.S. Government has not made any serious effort at healthcare reform since President Bill Clinton, and his wife Hillary’s effort, dubbed HillaryCare, was brutally defeated back in 1993. Since then, Congress has done a lot of talking about the issue, but hasn’t done anything substantial to address these issues. Yet increasingly, U.S. business – the driver of all our economic activity – is at a competitive disadvantage with not only developing countries, but also developed countries.

The main question we need to be demanding from BOTH Presidential Candidates is how much longer can we as a nation afford to ignore the many problems (lack of coverage, rapidly growing costs per capita, the buden on business, etc.) we have with healthcare?

I work with many people who have nothing and I havent heard how either of the canditaces are going to help them get out of where they are at, They need health care and much more , they are a viable goup, not to be foggotten about. I feel that the poor, if given the chance could be turned into the middle class, they too need jobs and education and healthcare!