Hello! For years I had no problem with coffee affecting my blood sugar. Over the past year…ugh! It is unpredictable. The logical thing to do would be to eliminate the variable and not drink it! The spike can come from both regular and decaf, so it’s not the caffeine… And there is nothing fun added to my coffee (cream,etc). And no pastry with that coffee either😜! Double arrow up! Ugh!

Does anyone else see coffee spikes? It used to be a free treat for me and now I need to bolus for it!!! 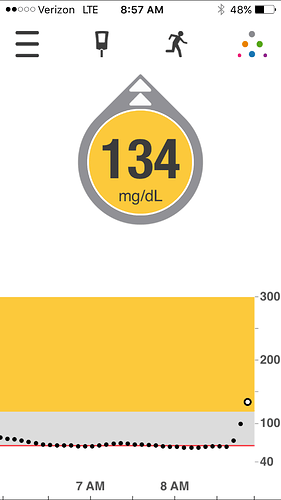 Hmmm. Coffee has never affected me. But then, it didn’t used to affect you, either, so I had better check occasionally to see if anything has changed. I can’t explain why that is happening to you, but thanks for the heads-up!

Does a cuppa tea (regular or herbal) have a similar effect?

ETA: Here’s a humorous bit of research on the effects of coffee on BG!
http://www.healthline.com/diabetesmine/great-coffee-experiment-and-blood-sugar-effect#3

Off the wall question, but… Are you just having the coffee, or are you also eating (and taking a bolus for) some food? If not – maybe the problem is DP, not the coffee? Try eating something - even just something with a little protein and no carbs (or maybe put some of that “fun stuff” - like cream - into the coffee?), and see if you get better results.

I laugh because my father used to dunk anything and everything in his coffee and there would be “something fun” in there at end of cup, pastry, donuts, toast…to funny. On a serious note coffee does count for something, I have to bolus about 1.5-2 units per 2 mugs with tbls of cream and one sweet’n’low in each.

I would experiment with doing your usual pre-bolus and eating breakfast without coffee and see what your BG does. It could be due to increased morning basal needs combined with dawn phenomena. If you spike after your usual breakfast dose of insulin without coffee, that points to other factors.

It would NOT be the logical thing to avoid the best drink ever!!

Well, with respect, the best drink ever is French Champagne.

I have them all the time. I cover and do the best i cna I also limit my coffee to one cup

I’ll drink to that.

A good evening is when both of those beverages have been on the dining table!

Some things can cause a blood sugar rise even though they don’t contain anything that could possibly convert to glucose. Simply drinking a large amount of water can do it. This is the incretin effect. When you consume a quantity of something your “guts” (sorry for the technical term) send a signal that among other things tells your pancreas to release insulin and glucagon. This normally helps non-diabetics “preemptively” control their blood sugars at mealtime. But when you are beta cell challenged, all you get is a glucagon response, hence you can see a blood sugar rise.

One thing you can do to narrow this down is see if this happens when you drink hot water or just water in the morning. If it occurs with water then you can be pretty sure it is the incretin effect.

As I learned in the epic film Wayne’s World, all true champagnes are French. The remainder are only “sparkling wines.”

"Live in the now."
Wayne Campbell
(or was it actually Garth Elgar who said this? Time to watch it again…)

True, but there are also many French sparkling wines that aren’t Champagne.

(Some of them are quite tasty, too.)

Trivia fact for the day: in order for a brandy to be legally called Cognac, it must not only come from a specific geographic area, but must also be made from a particular grape variety. (You can make brandy from just about any type of fruit.)

I too spike whenever I have a cup of coffee. I do add stuff but although I may add only 4 or 5 carbs to the coffee my sugar will spike to over 200. I did start bolusing for the coffee, but to have ANY effect I have to bolus for at least twice the actual carb count. ( and I am using fake sugar, non sweetened creamer etc)
although a cup of coffee is not bad wen I am running low

I have a similar problem when I drink coffee or tea in the morning. My blood sugar will go up a bit. I think its because I have not had a good amount of water in the morning. I find that my basal insulin works best when I’m hydrated. Then, when I would have mornings full of coffee then I would not be drinking water. I’ve started to drink a full cup of water to start my day (before my coffee) then I drink my wonderful coffee. I also don’t add anything to the coffee. Do you drink it black or with creamer ?

I put about an ounce of milk in my morning coffee and take a unit of insulin to cover it. I still spike above 200, but if I take more, I drop really low in 3 hours and it takes a lot of tries to bring it back up.

I put about an ounce of milk in my morning coffee and take a unit of insulin to cover it. I still spike above 200, but if I take more, I drop really low in 3 hours and it takes a lot of tries to bring it back up.

I use heavy cream, but not for that reason. It just tastes good.