I pre bolus and eat and fifteen minutes after eating blood sugar goes low. I drink orange juice and make a decaff. Ohh I can’t drink the decaf with milk because BG is going high. Pleanty of iob so I wait. Graph goes from 160 to 190 in ten minutes. I take insulin and wait… wait. Still 190s. I take a walk. Still 190s. I take more insulin. I wanted that decaf and milk but I didn’t have it. And its four hours until 150s. Flat lined at 190s for four hours. It was 18 units for one piece of bread and a glass of orange juice. Give me a break.

I think that’s just the nature of the beast… Simple concentrated carbs cause erratic blood sugars no matter how hard we try to prevent it. If you find a way to avoid that please let me know…

One thing I’ve learned with the CGM is that if I end up eating a little too long after the downward bend in the curve, I start to go a little low before my meal “kicks in”. I have had to learn to relax and just wait for it to turn back up before doing anything active. There is such a temptation to do a correction…but I’ve only had to help things along a couple of times with 5 grams of quicker carbs.

On those rare occasions I go low after a meal because I allowed too much time to elapse between bolus and eating, I rarely treat with more carbs any more unless my BG is down in the low 40s or lower and what I ate was primarily low GI food. I just lie down or do something relatively inactive until the BG comes back up, which it will do shortly. But my diabetes is quite predictable, so I don’t have much reason to react emotionally - or to feel any need for a pump or CGM. Those of you whose diabetes is less predictable would have much more reason to treat more quickly, because you probably have no idea how fast your body is going to react this time!

Not sure about you or anyone else, but my BSs overreact when it comes to certain foods/drinks, one is orange juice. I have to double the number of carbs in my pump when bolusing for orange juice. Bananas are another one. Its crazy. i stick to 15-20gram low or no added sugar fruit juice box. I seem to level off nicely after one or even two of those depending on how low I really am.

This is why I don’t pre bonus. I tend to drop before my meal kicks in to levels that I have to treat (when I start getting confused). The result is a high later. I will pre correct and wait until I am in my pre meal range, then bolus for my meal and eat.

For me, I have to bolus half the amount for unsweetened cranberry, cranberry-grape, cranberry-raspberry, cranberry-whatever. I sometimes wonder if it has something to do with the cranberry, or when I am feeling especially cynical, if the labeling is just wrong because there’s a less cran in the juice.

Here’s a day that went good…I didn’t eat all day until 4:30 after fasting labwork blood drawn.

I just got this watch and I am more aware and on top of. And yesterday was my first full day with the watch and I so much wanted a good one and to feel like I could do something. Yesterday was probably a time for the Afrezza backup plan to bring a high down faster. It was frustrating trying to wait for BG to drop that never came. And the watch kept alarming. I had to turn alarm off on receiver, iphone, and watch.

Funny thing with the watch today. Just after lunch time it stopped working. It took some effort and it downloaded a software update. And then started working again. This pebble watch is the best way to go. 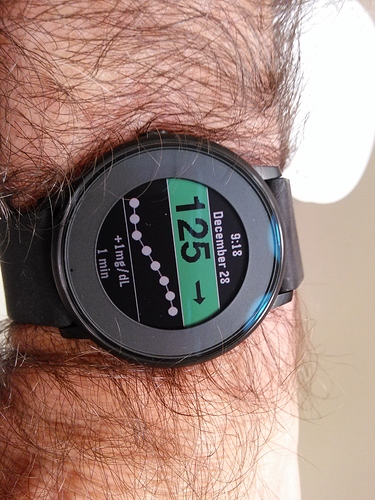 @Aaron10 What app are you using? I’ve never heard if the Pebble Watch, but I am very interested if it tracks your BS levels. Thanks.

You know that g5 comes with an apple app? Pebble is a smart watch. Pebble watch comes with its own apple app. You open that app, install the watchface “simple cgm spark” and in setup you use your Dexcom account. Simple as that.

Thank you @Aaron10. I do not have an IPhone nor a Dexcom…but it sounds good for a lot f other PWD.