Hurray for Abbott! New, cheap meter with cheap strips will help many!

Saw this on another site and wanted to pass it along…the new Freestyle Precision Neo. 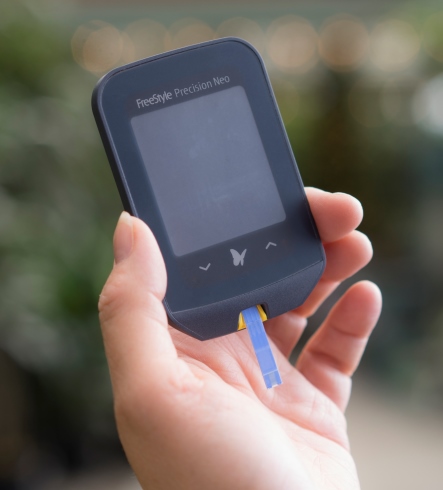 Where can you get one? Design, features, and prices explained.

Abbott’s goal with the Neo is to offer very high quality strips to those
purchasing them without insurance. As a result, the meter launched with a
“Skip the Copay” program. The Neo meter retails for $22-27, and the test strips are
available without a prescription (over-the-counter) at $14-17 for 25
strips. For those without insurance, Abbott’s strips are in the middle
of the road – more expensive than Wal-Mart’s Reli-On Prime and
CVS-branded meters ($4-6 for 25 strips), similar to a Walgreens-branded
meter ($13-18 for 25 strips), and cheaper than paying cash for strips
from LifeScan, Accu-Chek, and Bayer (ranging from $20-44 for 25
strips).

I wonder if my endo can pull my numbers off this meter like the accu-chek Nano? I sent an e-mail inquiry but never got a response back. If it is possible, I will definitely change over because the strips for the Nano are expensive!

it says u can upload to a computer

Thanks PB. Worth checking into.

The Neo meter retails for $22-27, and the test strips are available without a prescription (over-the-counter) at $14-17 for 25 strips.

While the goals are laudible, I’m not quite so sure about the actual prices.

I don’t really pay much attention to the retail cost of test strips since they are part of the supplies which are covered for me. However, I do at times check out the price of the strips I use, the Bayer Contour Next, on amazon.com.

After a moment of forgetfulness recently where I was without my meter overnight, I decided to get a “back up” Contour Next meter. I picked up (after a few days to have it shipped) the Bayer Contour Next Ez meter “kit” for $7.79 from amazon.

The price of the Contour Next strips varies almost daily, but at the moment it looks like you can get 300 strips for ~$68 or about $5.67 for 25 strips. (if my arithmetic is correct).

So … the prices for the Abbot meter & strips seem rather high to me.

I love the accuracy of the Contour Next. I hate that we can’t see the screen outside. Often it takes two of us, squinting every which way at the screen, trying to shade it from light, to see the bg result. Other than that issue, the meter works well for us.