This is the first lab A1c I’ve had since using the Dexcom 5 - it went down from from 7 to 6.4 which I am very happy about and attribute the decrease to the use of the Dexcom. But the Dexcom Clarity reports an A1c of 5.5. I get a lot of false lows with the Dexcom, especially during the night. Any ideas on how to improve the accruacy of the Dexcom? I wear it on my abdomen and try to make it last 2 weeks - maybe it degrades during the second week - but I think it happens regardless of how long I’ve worn the Dexcom. Thanks!

I was told to make sure I’m not calibrating when I’m going high or dropping; apparently this messes up with having an accurate reading. Way to go on the A1C!!

Doing some searching and reading online I found the term, “high-glycator” in one article. It said that the aggregate attachment of glucose to hemogloblin cells (the basis of the A1c) differs across the population. Some people find themselves in the average, some less, some more. So, I concluded that must be the case with me.

I also read this DiaTribe report they wrote in preparation for the recent FDA panel presentation that considered adoption of other outcomes beyond A1c for measuring the effectiveness of medicines and technology. This report showed that the actual average blood glucose exposure for a given specific A1c actually varies over quite a range. An A1c of 6.0% does not equal a discrete 126 mg/dl, instead it covers a range of average glucose from 100-152 mg/dl. An A1c of 5.0% corresponds to average glucose of 76-120 mg/dl, not an exact 97 mg/dl.

Do you see the possibility for confusion? The A1c is not as exact as it at first appears. It’s a shame that we have been sold this number as the method to grade all our efforts.

The Dexcom Clarity program does not employ ranges when it reports, it simply assumes a discrete value that is at the center of the range. If you’re above or below that center value, and many of us are, then your report will be skewed.

Have I thoroughly confused things?

Nice work Gracie. My last couple a1c’s have been within .1 or .2 of my Clarity report.

Beyond the recommendation above, I find it best to only calibrate when your blood sugar is steady (i.e. Not after meals or exercise). Often, I wait sometimes hours to put in my calibration reading.

@Terry4 - LMAO, I need to sit and read your post with a glass of wine in hand and zero noise.

Mike – The DiaTribe report that I link does a good job, in a longer way, of explaining this. It seems we’ve granted the A1c number all kinds of precision that’s definitely not there!

My Clarity reports are all consistently in the high 5’s but my A1C has never gotten below 6. Latest one was three days ago: 6.1; Clarity for the same 3 month period shows 5.7. In general my Dexcom readings tend to exaggerate lows more than highs, so I just mentally try not to get too emotionally wedded to those 5’s.

Mike – I agree that poor calibration practice may also explain the variation that the OP asked about. I’m careful with following the calibration protocol you reference and I still come up with a discrepancy between my lab A1c’s and Clarity. I’ve actually had closer comparison with two recent A1c Now home A1c test kits.

This is the first lab A1c I’ve had since using the Dexcom 5 - it went down from from 7 to 6.4 which I am very happy about and attribute the decrease to the use of the Dexcom.

Good job, @Gracie9! The CGM, as you’ve found, is great tool for us.

I had historically had a significant mismatch between my meter readings and my A1c. I had thought I was just a high glycator. Since getting my CGM in July and getting my A1c at the end of Aug, they pretty much agree. But just a single data point does not make evidence. It makes an anecdote (to quote my friend and birthday boy @David_dns).

For most of the last year, my Clarity report’s A1c estimate and my lab’s reported A1c have been different by around 0.5 (with Clarity being lower). This last time, I compared the 90-dat Clarity report (now that it’s available) for the immediate 90-day period with the report for the previous 90-days. They both reported the exact same A1c of 5.0 (though other statistics like Standard Deviation and Time in Range were significantly different). Since my last lab A1c was 5.5, I expected a similar result this time; however, this time, the Clarity report was dead-on with my lab’s reported A1c of 5.0.

My take from this is that there are multiple variables at work that change the accuracy of the Clarity estimate. My current SD has been 8-10points lower than his had been previously, and my Time in Range has been consistently greater lately in the 92-95% range. Dexcom often reacts slowly to big changes in BG – most likely resulting in the earlier discrepancies, I believe. With better control, I see better data - and results.

I just got my results for my son.

My last A1c was .1 higher than what Clarity said and exactly what mySugr said. My A1c’s are normally in the ballpark of what my Dexcom would suggest.

My most recent lab A1c was exactly what Clarity said it would be. This is the first time I’ve compared them, so I’ll be curious to see if that pattern holds. I imagine variation in people’s experiences could be due to individual differences in both how accurate the interstitial fluid readings are and how the body’s hemoglobin respond, perhaps especially when levels of control are shifting?

Thanks @Terry4 - a range makes sense vs. a discrete value - I’m kind of surprised that so many people have small or no discrepancies between the Clarify program and actual A1c. I’ll try to pay more attention to when I calibrate as @ALY1 and @mikep mentioned. Although I calibrate primarily only when I wake up and before dinner which is usually 12 hours apart. I don’t have a lot of opportunities to do a finger stick during the day. In the morning my finger stick is always higher than the Dexcom and before dinner they are pretty close.

In the end - my A1c went down quite a bit - that was the whole point of using the CGM. So I’m happy. Will see how this work out in the long term. Thanks again.

I’m kind of surprised that so many people have small or no discrepancies between the Clarify program and actual A1c.

Not sure, but it makes sense to me that more people and their A1c’s are grouped around the average. The outliers are there but they’re not as many.

Anyway, your CGM has served you well. I find it invaluable for timing pre-boluses and setting basal-need changes.

I was disappointed as well with my A1C. What you should also look at is your standard deviation. The wider it is, the more variable your estimate is. For example, here is my current Dexcom Clarity estimate. So, my BG average is 130 plus or minus 33. That means my average glucose could be anywhere from 97 to 163–which translates to somewhere between 4.9% and 6.7%. Pretty wide estimate. Guess which way it will probably go? 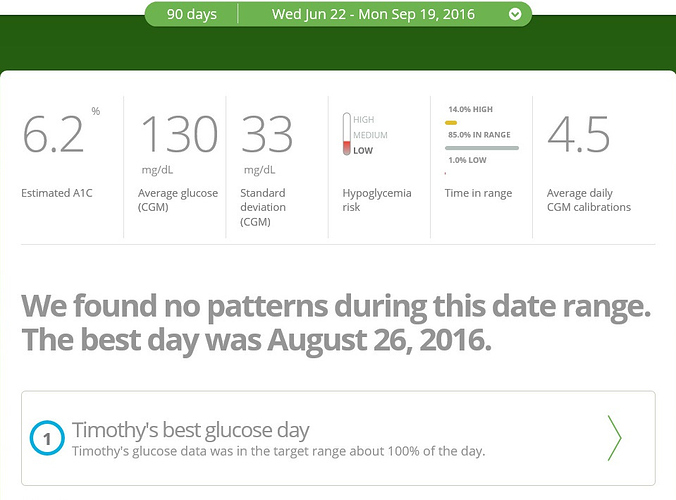 Hi @Timbeak48, no that’s not what it means. Standard deviation (SD) shows how much bg readings varied around that average value during that period of time. In your example, average of 130 and SD of 33 mean that around two thirds of all your bg readings were between 130-33=97 and 130+33=167 during those 90 days. It does not mean that your average could be anywhere between 97 and 167. The average of all your Dexcom collected bg readings during that period of time is 130, period. There are many reasons why the Dexcom average may not match A1c lab result, but SD value shown on the Dexcom Clarity page should not be interpreted as one of them. By the way, your numbers are not bad at all, SD of 33 is pretty good, and just 1% low is very impressive, congrats!

I agree, though, I do think that the larger the SD, the more likely that the Dexcom estimate will be off – at least in my experience. Depending on how quickly the change, Dexcom response slowly, plus, on the higher side, the accuracy decreases (usually, it seems favoring lower values). Al that adds up to potential for discrepancy.

@Gracie9, I usually wake up a bit dehydrated (and probably a lot of folks do) – I find that my Dexcom and first meter reading are much closer if I drink a glass of water 10 minutes before testing.

For what it’s worth, my totally accurate Clarity A1c was with an SD somewhere between 50-60 (don’t remember exactly). Also, I’m not particularly good re: calibrating—I do the twice a day early on with sensors, but then sometimes fall back to once a day once everything seems to be going smoothly and if it’s all making sense. shrug Maybe it was just a fluke; we will see when I get the next one.