Hi, do any of you actually drink the Glucerna shakes or shakes they have around all the diabetic areas? Wonder, do they help, hurt, matter? Does it make a difference? Should it be substituted for a snack, a meal? Seems better if you’re on the run and dont have something quick on hand.

Tried them once. Blood sugar shot up through the roof.

I haven’t tried them but looked at their nutrition label one time and decided they weren’t for me. A large drawback for me is the 23 grams of liquid carbs per eight ounce serving. 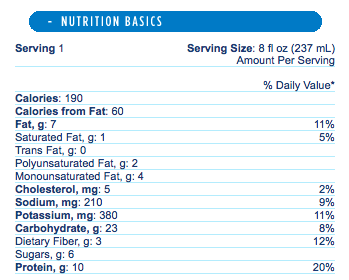 I also don’t like eating things that contain an extensive ingredient list. Can you even pronounce all of these ingredients? 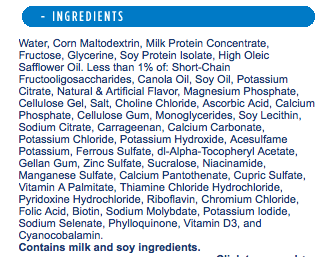 I’m no saint and I have eaten many things like this in the past. I wouldn’t make this choice again given most other options.

Your diabetes is different than mine and you may experience much better blood glucose results than I would. My BG would spike if I drank a Glucerna shake given its 23 grams of liquid carbohydrates.

I’d certainly never consider giving my daughter something containing 23 g of carbs in 8 ounces! Not unless I wanted to rage-bolus a stubborn high for hours. I don’t think anyone following a lower carb diet would even consider a Glucerna shake!

would anyone like to mention brands of protein shakes?

Terry4, I actually can pronounce all those ingredients. Doesn’t mean I’m gonna eat 'em, however!

Ditto on Glucerna being incompatible with the low-carb diet. This is such a pet peeve of mine, the things they offer in the ‘diabetics section’. They, like Glucerna, are highly-processed and tend to have artificial sweeteners added which I avoid. I believe plain milk is better for you than Glucerna. I did have one Glucerna that a nurse brought to me during my hospital stay and it had the most sickenly sweet taste!

Pure Protein or Premier Protein for example. There are many brands. If you do an Amazon search on protein drinks you can see a lot of the nutritional labels.

I don’t use any of these products myself, but if I were looking for meals in a can I think I’d start with things like these instead of glucerna

Before I quit processed foods I used to drink this https://myvega.com/products/clean-protein/ it is low carb.

So, question. If something says 15 or 20 grams couldnt that be a snack? I thought abour 20 grams of carbs was ok as a snack if nothing else is eatin. And can you have around 30 or 40 for like dinner?
I mean everyone is different but whats a good carb control for a snack or lets say breakfast?

You can have whatever you want for meals or snacks; there are no “rules” or “laws”. But a great many people on this Forum would not consider 20 to 40 grams of carbs per meal or snack to be anywhere close to following a low-carb diet… Didn’t you say you were already following a low-carb, healthy diet? I could be mistaken…

Some folks here follow a zero or near-zero carb diet in order to manage their BGs!

I mean everyone is different but whats a good carb control for a snack or lets say breakfast?

I’m not at all being flippant here when I say: Whatever your meter says doesn’t spike your blood sugar up higher than you are comfortable with, with the medications you have available, and are comfortable taking.

If your only medication available is 500mg a day of Metformin, that may be 0-10g of carbs for breakfast coming from low-glycemic sources such as Greek yogurt, low GI fruit from the berries family, eggs, breakfast meats, cheeses, and low-carb veggies. Then again, it could be 20, or 25, depending on what form those carbohydrates take (liquid carbs tend to spike higher and faster than something your body has to work to digest).

If you have access to insulin a healthy amount of carbs at breakfast, once you know your I:C ratio and have your basal insulin properly set may mean a whole grain English muffin.

The only way to truly answer your question is with your meter. Test before eating, eat something, and test at 1 and/or 2 hours afterwards. If the number you get is too high for your liking, make adjustments in what you are eating.

The only way to truly answer your question is with your meter. Test before eating, eat something, and test at 1 and/or 2 hours afterwards. If the number you get is too high for your liking, make adjustments in what you are eating.

This describes the “eat to your meter” philosophy that many here use. The beauty of eat to your meter is that it accounts for the variable nature of diabetes as well as the personal preference of the person with diabetes.

Some people may identify the acceptable BG range as 80-180 mg/dl (4.4-10 mmol/L) while others may prefer 70-140 mg/dl (3.9-7.8 mmol/L). One person may spike severely when they eat potatoes, for example, while another person only spikes mildly. The meter measures, you evaluate.

I dont eat rice, pasta, or breads. I do have veggies and sweet potatoe. I dont eat cereal, except for my bad slip up but I would say I’m pretty low carb. Who the heck can drink those shakes then? Weird

Keep in mind, people like us in this forum are, I think, a bit of a minority. There ARE people who are quite content to take their metformin and/or any other oral meds, only test 4 times a day (or less) and never actually know that their blood sugars are shooting briefly up to 300 after drinking one of those because by the time they check at lunch, they’re back down to normal again. For them, they do as they’re told and don’t fight with their doctor or insurance, no matter how bad the advice they are given, and they put their diabetes as far out of sight-out of mind as possible until it catches up with them.

There are diabetics whose doctors, even T2s who don’t have as much to worry about with hypos, only have them aim for an HbA1C of <7%. There are still doctors using sliding-scale insulin, and who go pale and pearl-clutch at the thought of a patient changing their own insulin dosing on a basal-bolus regimen because they might have a hypo! (I speak from personal experience here!)

And on the other hand, there’s probably a few diabetics out there with semi-decent insulin response for whom these Glucerna shakes don’t spike them into the stratosphere without needing to dose insulin for them. But I’d also wager they’re rare.

I’ve used the Glucerna shakes when I’ve had flair ups of my gastroparesis. I’ve always managed to tolerate them ok with no crazy spikes, but of course everyone is different. I’ve also used them too when I knew I didn’t have time to eat a meal, and wanted something to tide me over. Once again, no major issues. But I also seem to handle carbs with blousing for them ok.

There are 27 carbs in one cup of sweet potatoes. Not all veggies are low carb. “Low carb” means different things to different people. Some people would consider anything over 20 carbs per day to not be low carb. How many carbs on average do you eat a day?

ETA: Is your diet also high-fat?

I totally eat that many carbs but the problem for me with shakes is that they are in liquid form and even though they are advertised as a meal replacement I would still be hungry. I prefer carbs that I have to chew and that have fiber with them and come as a side to protein and veggies. For a snack, I mostly eat tahini with celery sticks or a piece of cheese which neither I have to bolus for. I imagine bolusing for a shake would be similar in timing as bolusing for candy. It is a fast carb for sure.

I tried one once, that was 10 years ago, I still have not gotten back to normal. , no not really but it was devastating to my blood sugar