Hi guys, it’s me again.
I can’t believe this is happening. It’s so soon that I still need to make an appointment with my Endo and my GP. I’m late. I’ve been late before, but it’s unusual, and usually coincides with an illness. I haven’t been sick. I don’t know why, because I know it’s usually best to wait two weeks, but I felt like I had to take a test Tuesday morning. Fortunately, I had one.

At first I only saw one line, and while I was disappointed, this time I had pretty well reconciled with myself that I expected it to be negative. But then I realized the line was in the wrong spot. Within moments the second line popped up. It wasn’t as dark, but I’ve been looking around and that’s pretty common with early-stage pregnancy detection. Besides, I’m not on anything that bunks up tests with false HcG readings. 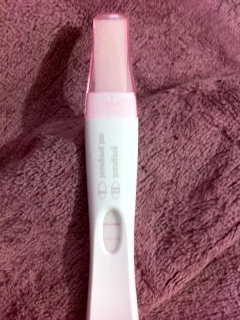 I don’t know what I’m feeling right now. I’m happy. I have a huge desire to start cleaning everything, hahaha! Lots of big things to do. I have an eye test on the 20th (testing for glaucoma). I need to make those Dr. appointments and see my nutritionist. I definitely want to see if there is a group in town of pregnant type 1s. Fortunately I’ve been planning this for awhile. I have my prenatal vitamins ready to go. I stopped drinking coffee and caffeinated drinks about two weeks ago. Sad, I had a huge sushi craving last week and now I won’t be able to eat it!!! I think I’m just feeling really realistic about this, and before I was feeling really dramatic, and overexcited, or fatalistic. I just, feel like I think I should feel for the real deal. And that’s oddly comforting.

I just thought someday someone was going to tell me that I wouldn’t be able to have babies. I really believed that.
K.M.

congrats!.
Hope everything turns out ok.How far are you?

Thank you. So do I! My BG has been a pain to keep low for the last week or so, and I’m fairly certain I’m having some insulin resistance issues. I’ve been testing and injecting like a crazy person and I’m still floating a lot higher than I want to be. It’s making me really moody because I’m so nervous that I’m not going to be able to control my diabetes during the pregnancy. I’m estimating about 4 weeks, according to the due date calculator. But I have to see my doc to be sure.

Congrats! That is wonderful news. Let us know what the doctor says.

Thank you! I will definitely keep everyone in the know. I don’t really know many (or any) diabetics here, personally. As much as I’d like to my work schedule interferes a lot. Thanks for being the group I get to celebrate with!

Thank you! I’m still trying to figure out whether what I’m feeling is symptoms or in my head. I’m craving clamato juice (bad… bad… 12g carb per 250ml) a lot. The cramping is getting less, gentler. I am more tired, so I’m having to set alarms, even when I’m awake, just in case I fall asleep on the couch or something. Sugars are pretty level- a little elevated in the morning and sometimes at night, but I’m testing like a freak. Strange, but it’s not as painful as usual.

Thanks! I am so thrilled. I keep feeling like I should test again just to make sure it wasn’t a false positive, but I’m so afraid that it was that I can’t bring myself to! Waiting for my Dr. Appointment to absolutely confirm, but I’m certain- morning sickness and fatigue already. Thank you for the blessings!

well,it’s good to know,as for the injections;have you thought about a pump,I know a few pumpers who started pumping just to control their BGs.Maybe it’s time you give it a thought.It would definitely help with the resistance issue.

I am going to bring it up with my Endo at the appointment. When I was at the Diabetes Daycare last year, I mentioned wanting to have a baby and was told that I would probably be put on a pump whether or not I wanted one, for the protection of my pregnancy. I think that I would really benefit from a pump even without the pregnancy. I’m actually doing a lot better with the pens than I expected to- but I’ve had to be really vigilant.