What's everyone eating for Thanksgiving?

My apologies to the international visitors to this US-based website. Thursday is our Thanksgiving day, the best holiday on our national calendar. It’s all about eating, community, and gratitude. A big party without the burden of gifts! What’s not to like?

I am making an instant pot paleo pumpkin chili.

What are you eating for Thanksgiving?

I’ll be on board a ship but fortunately we’ll be in my home port for several hours around dinner time, so my family can come down and the cooks will put out a full blown thanksgiving feast

I am on my way to turkey town with a stop off in shrimpville.

Traditional here. A little of everything, including the carby foods. We’re actually looking forward to it. Hopefully, we’ll do okay. I used to extend my bolus for Thanksgiving (and other similar types of rare events) but since I’m not using my pod to bolus, I’ll be shooting up every hour, trying to mimic (or come close to) an extended bolus.

Oh for those who might wonder what I mean by traditional … turkey (white meat person), my husband gets the dark meat, stuffing, mashed potatoes and gravy, squash, pumpkin pie with cool whip, cranberry relish, green bean casserole, corn (which I won’t have, only because I like the stuffing and squash, potatoes, green beans more … corn is on the table to appease the appetites of some familiy members who put their nose up at squash or green beans casserole!) Then of course there is apple pie, cool whip fluff made jello and pudding.

I’ve got a fresh charge on my CGM and fresh batteries loaded in my (Edited to change CGM to PDM) … a new lancet, and a few new needles! I’m ready! Well, almost. Tomorrow I have to clean and dress our 20# Tom and set him off in the oven for a log nap. Then I’m off to clean potatoes, green beans, and squash. At some point I’ll start the gravy and get the crescent rolls in the oven too. Today I made two pumpkin pies, apple pie, orange/pineapple fluff, meatballs (little) for wedding soup on Friday! Yum! One thing for sure is, no one will walk away from the table, hungry. Wedding soup is on Friday, with cold turkey sandwiches, topped with cheese, pickles, lettuce, tomatoes, perhaps some miracle whip too

See … traditional. I must say though for the past four or so months I have been practicing with Swerve and using it in all my recipes that call for regular sugar. It measures the same and tastes the same to us and greatly lowers the carb count!

Happy Turkey Day to @Rphil2 and @Tapestry! Enjoy the feast and friends.

Hahaha I was thinking of asking the same thing! Glad someone did this. Roast Turkey, StringBeans, Potatoes, Stuffing. Traditional here too. Mom used to make the pearl onions too which I liked. I also like Brussels sprouts, and squash soup. I might have a bite of pie. No cranberry sauce but plenty of gravy with giblets. Happy Thanksgiving everybody. Be well.

I was a little leery about the can of pumpkin called for in my pumpkin chili, when I did the calculation, it only added about 10 grams of carbs per serving. Add in the tomatoes and a few carrots and the entire portion is well under 20 grams of carbs.

I’m thinking your brussel sprouts and squash soup may be similarly easy on the carbs. Enjoy your holiday meal!

What am I eating for Thanksgiving? EVERYTHING! I just took a 12u bolus 100% extended over the next six hours. I’m not going to be “diabetic” today. I’m just going to enjoy!

Every single item made from scratch, with fresh produce/ingredients, and made with love. I’ve been cooking for three days, you better believe I’m going to savour every bit of it!

Enjoy, Robyn. Even though diabetes will never give us a day off, sometimes you just have to take it for yourself! Your food description alone makes my mouth water.

Even though it’s not Turkey Day here in Canada, I’m having ribeye steak and salad.

To all my friends in the USA - Happy Thanksgiving

How was the pumpkin chili? It looks delicious!

The combination of pumpkin and chili works very well – tasty and hearty. I’ve never tasted that combination before. A great fall-harvest banquet! Bg-wise, I’ve been floating around 140 mg/dL (7.8) for the last 90 minutes so I’ve taken two 4-unit Afrezza doses about an hour apart to tamp the BG line down.

I did serve myself a second smaller helping at dinner, it tasted so good. That probably contributed to this higher glucose level than usual after eating. I’m hoping to be down to < 110 (6.1) and slowly sinking to < 100 (5.6) by bedtime in 2-3 hours.

I love pumpkin and I love chili, but, like you, I wouldn’t have thought to put them together. I’m intrigued. Will you share the recipe?

I cooked for all. The guys like the tubular cranberry jelly from a can. I also made a fresh/stovetop blend of a cran relish.

Crème Brulee (yes it had the sugar topping but not mine) 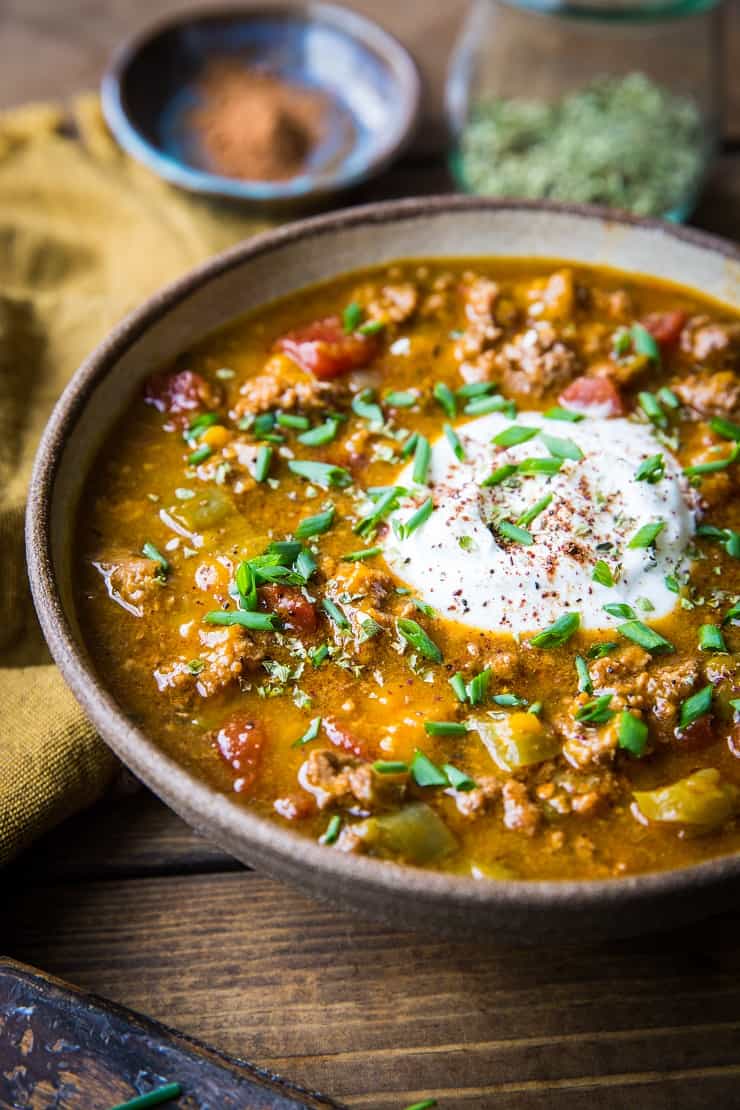 Beanless paleo pumpkin chili made easily in your Instant Pot (or on your stove top!) This one-pot meal comes together quickly and is healthy comfort food at its finest! When the weather begins to c…

Crème Brulee (yes it had the sugar topping but not mine)

Yum, it all looks good!

We had prime rib with Yorkshire pudding for Thanksgiving, and we will probably eat Turkey for Christmas. We are a mix of British people and non-pork eaters so this way worked best for us. Ironically, yesterday ended up being a no hitter for me, which seems to always happen when the meal is just overly large. I was thankful for insulin and still being alive, and my new dexcom.

Thanks for posting the link, Terry. There are several recipes there that look good!