While I am not a user of Tandem’s Basal-IQ pump/CGM/algorithm new system, I thought those interested might enjoy this review. Wil Dubois writes for DiabetesMine. His style is down-to-earth, authoritative, and written with the informed bias of someone who lives with diabetes all day, every day. Bottom line, Wil likes this pump but does note some irritations it causes him. 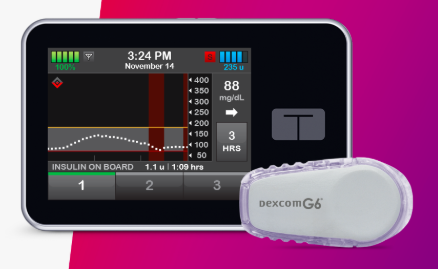 If I weren’t using Loop, I’d likely be getting this pump. Enjoy.

Do you have additional questions?

I have been trying to close loop for awhile but the pumps are so hard to find without costing an arm and a leg!
But I must say, this predictive low suspend is I think the best on the market right now. I have meet and talked with many who are using it and the amounts of lows have almost disappeared! And I have been following your posts with great interest! I am hoping to get a new one in a few months as my t:slim will be out of warranty. Hopefully I won’t need any help because it sounds pretty darn easy! And looking forward to the next upgrade next year. Such an exciting time!

Tandem has a great deal to offer. If you buy the current model, you will maintain an easy upgrade path to the Control-IQ next year. It’s like getting some future proofing insurance in the package. Eliminating over-night lows is a big deal. As we know, win the night and you’ll likely win the day. Just the knowledge that you’re very likely protected from a serious hypo is a great comfort that helps you sleep.

For diabetes-tech, it is an exciting time. My crossover to the commercial side may be with a t:slim X3 running Tidepool Loop. Will that happen? I wonder how long it will take? Three years, five years? Never?

My crossover to the commercial side may be with a t:slim X3 running Tidepool Loop.

The third generation Tandem pump is the t:sport. It will be released with Control-IQ and be remote controlled from both a dedicated “medical” control device and an app on a smartphone. (Your choice - similar to how the Dexcom G5/G6 works from either the dedicated receiver or the smartphone app.) The forecast launch date of the t:sport is Summer 2020 for which Tandem feels very confident on hitting the timeframe. This will carry the iPump designation so it will be able to operate with iCGM devices however it will not be consumer level “plug-n-play”.

Tandem has given no indication of working with Tidepool.

The forecast launch date of the t:sport is Summer 2020

Cool, just when my medtronic pump is out of warranty!!

Not at this time. I still have 1 yr on my Minimed.

This will carry the iPump designation so it will be able to operate with iCGM devices however it will not be consumer level “plug-n-play”.

Do you think this precludes a pump manufacturer from offering more than one algorithm option? I don’t know the technological challenges but it seems that manufacturer level plug and play could work. Then the consumer could remotely load updates as appropriate, much like Tandem is already doing.

Do you think this precludes a pump manufacturer from offering more than one algorithm option?

No. This definitely does not preclude more than one option from an FDA regulatory point of view. The iCGM is out there and a done deal. So we can assume certain things about the iPump based on the iCGM but realistically there is a whole lot of speculation until it (iPump) is done and published.

The FDA specifically wants and is encouraging interoperability.

Tandem has publicly stated that in addition to the FDA approvals, there is also the business relationship required. As well, Tandem said that the near future (which includes the t:sport) does not include end-user ability to plug-n-play components as they desire. (Paraphrased - although I am sure I could find the exact quote.)

So from the Tandem point of view, there does not seem to be a near-term option in terms of the algorithm. It is currently Basal-IQ (developed in-house by Tandem) and will soon (Summer of 2019) be Control-IQ (licensed technology from TypeZero which is now part of Dexcom). However on the other side of thinking, Tidepool has stated they are in discussions with pump manufacturers in regards to the iPump (without being specific as to which pump companies) which would certainly seem to imply Tandem. During initial phases of partnerships between companies, I am sure that various forms of NDAs are quite common. So there definitely could be something going on which is not public information.

In terms of mixing and matching, I would think swapping out one iCGM for another (like maybe Dexcom for Senseonics) would be an easier place to start. That concept (from a regulatory point of view) appears to be fully in place by the current FDA standards in regards to the iCGM. Although until another company (in addition to Dexcom) has an FDA approved iCGM then it remains speculation.

By far my favourite line is when he writes:

Tandem has a real winner here. But the jury is still out on whether it’s a keeper, and I will have to decide in the next month of using the loaner. The first week or two, I had amazing blood sugar control, but I’ve noticed that every time I change my therapy, the first few weeks are great. I’m convinced that diabetes is an intelligent alien parasite that you can catch off guard, but quickly adapts.

It’s so true. Whenever I change pumps, change from pump to MDI or vice versa, try a new insulin, etc. my control is always amazing for the next 2-3 weeks and then everything goes back to normal.

terry, thanks for that link in your OP. I read every word of the article. He echoed what many patients complain about–the pigtail, case/screen orientation, and too many confirmations needed.

Wouldn’t it be great if we could special order a pump? Get everything you want and need vs all the stuff you don’t want or need. Just like ordering a car vs buying one off the lot! Who knows, maybe it could happen?! I know wishful thinking, but so nice to dream.
Every pumpi have had, there have been things I like and things I don’t but always seem to work with it. Have yet to have a pump that did everything the way I would like it to.
But I will say, I have been to a couple focus groups with pump companies that were asking about some prototypes and looking for opinions. And even in groups of 20, every pump discussed had some who liked it and some who didn’t. Will never make everyone happy. It’s a numbers game and how to make most happy.

I gave feedback for a $100 payment, on a pump that an unnamed company was thinking of bringing to market. I had to drive out of town to see the pump, answer questions and give my honest opinion about it. IIRC, it was the prototype for Medtronics color-screen pumps.

This just came out yesterday, it looks like Insulet is working with Tidepool. Omnipod announces iPhone control and interoperability! There are so many things that we use everyday and couldn’t imagine living without. Air conditioners, a car and indoor plumbing to name a few. These one-time innovations are now technologies that...

I recently received my new x2 and am using it with the G5. I was so impatient to dump my Animas Ping I cracked open the manual and worked my way through it in a day. The cartrdge fill was a little weird but transferring the settings, creating a t:connect account, etc went well. I have been using Dexcom since 2008 so no problems there.
I agree with everything Wil wrote except his final two concerns: upside down display and the cartridge connector. I learned to read upside down while sitting across negotiating tables so no problem there. The connector does give the pump a “medical” look but I either carry the pump in the pocket of my SPI belt that holds both the pump and the connector or, being retired, I just hide it under my casual, untucked shirt.
I am looking forward to updating to the iQ feature and the G6 once the latter is approved by Medicare. I tend to aggressively manage my BG and am thrilled at the thought of sleeping without being awakened by a glowing, beeping iPhone and pump.

I tend to aggressively manage my BG and am thrilled at the thought of sleeping without being awakened by a glowing, beeping iPhone and pump.

While being abruptly woken up isn’t fun, I’ll take a low alarm over sleeping through a serious low. I appreciate the tech we have!

But avoiding the low, the warning beeps and glowing lights, and being able to sleep through the night is the point of the iQ and similar tech.

I know that, John.

I can’t do iQ until Medicare covers a G6. So far, been warned of highs and lows is a TREMENDOUS step forward and I think we should all thank tech for helping us out.