“You’re a diabetic, you can’t get tattoos.”

I heard this for years, and I believed it. Doesn’t diabetes mean we don’t heal properly and that we have a greater risk of infection? Not in my experience (T1D). My immune system is so strong it kicked my beta cells’ asses. I think we are fine. With diabetes we have the same choice to make that other non-D get to make. If you want one, get one. If you don’t then don’t.

If you choose to get one make sure your blood sugar is in order, have snacks with you to make sure you don’t go hypo during, be sure your artist is aware, and make sure the environment is clean.

Here’s a great place for examples of awesome diabetic ink.

Who here has a diabetes tattoo? Did you experience any complications? What are your tattoo related questions? 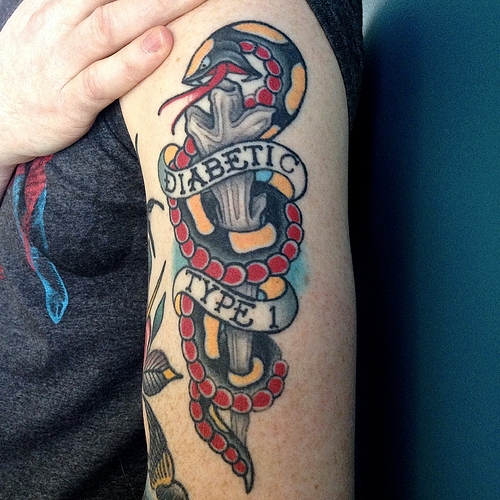 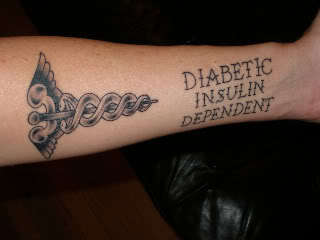 More “functional” than “artistic”, but that describes my basic life philosophy pretty well too.

Nice tats folks! I’m planning on getting one that says “Mother of a Type 1 Diabetic”.

Here’s mine. The picture’s a little fuzzy, I know. I got it in 2013. I did have a little “ink bleed” off the side of the butterfly that made a halo that looked a little like a bruise. It wasn’t a healing issue due to my diabetes, it’s just something that can happen, especially on thinner skin such as the inner arm like that when there’s a very solid area like that black edge. The capillaries catch some of the ink and pull it away under the skin. I recently went in and had another cloud added that matches the one at the bottom by the medical alert symbol.

This covers the majority of my left forearm, starting at the wrist and stops about 1-1.5" inches from the crease of my elbow. The medical alert symbol is about 1.5" across. I have had one since HS, healed as fast as other friends who got them at the time. Like some have said T1’s in good control heal faster and are more resistant to infections…

@diabetesdominator (Daniele H) replied to us on twitter that she regularly wears her cgm and infusion sets where she has ink. I had thought this was a no-no.

The “official” word from Dexcom, at least on the G4 model (which uses the same sensors as the G5) is:

• Avoid inserting the sensor in areas that are likely to be
bumped, pushed or compressed or areas of skin with
scarring, tattoos, or irritation as these are not ideal sites
Dexcom G4 PLATINUM User’s Guide | 25
to measure glucose. Insertion in those areas might affect
sensor performance, and you might miss a low or high
blood glucose value.

I don’t know how a tattoo would affect an infusion set. I don’t think I’d want to put an infusion set over a tattoo mostly out of risk of messing up the tattoo itself if I ended up with some weird, random reaction to the adhesive or tape out of the blue, or an irritated or infected insertion site, or worse, a case of lipodystrophy, though I know it’s rare.

Custom artwork from a quality shop with a good reputation can easily start at $150 per hour or more depending on where you live, and a tattoo takes a minimum of 2 weeks to fully heal. To me, they are a work of art, and an investment in self expression and transformation that I wouldn’t be willing to risk having to be repaired. As someone with diabetes, I’m also not willing to get tattoos on my lower legs, as I’ve already seen that wounds there tend to heal a little slower, so I really mostly have space on my back, and my left arm and left thigh since I sleep on my left and wouldn’t want to put a CGM on that side

Love this! Beautiful art, I think my favorite of all the diabetes tattoos I’ve seen!
I have several tattoos, but none related to diabetes…

I wear both my CGM and pump over my tattoos all of the time and have never had an issue. Not sure that will always be the case, but for me it has been

so we’d love to see some tattoos, upload your pictures if you have them

I would totally do it, but I’m afraid of needles.

I would totally do it, but I’m afraid of needles.

And @Duck_Fiabetes wins the thread!

I really like everyone’s ink on here. Thanks for sharing!

I have 3 tattoos currently but none of them related to D at all.

I do plan on getting at least one or two that do have messages that refer to my T1D but in a more subtle way.
I would love to get a small I>∧∨ (I’m greater than my highs and lows) and also a ship with waves and an anchor and for it to say something along the lines of “captain of my own ship” both tattoos reference diabetes and have encouraging reminders for myself to not be too harsh on one hand, but also to not let go.

Even though I’m not ashamed in having diabetes at all, I think I just like the more subtle approach to my tattoos, having them mean something special to me, yet not revealing the meaning to onlookers.

I think having a tattoo that identifies me as a diabetic is a great idea, although at age 62, I don’t know if I am up for it. I have lost two very expensive medical alert ID bracelets, though, so having something permanently inked on me that identifies me as a Type 1 in case of a medical emergency seems like a logical choice. My tattoo would be smaller, though. Perhaps just a band of flowers or something that has the medical alert symbol on the top of my wrist and the “Type I Diabetic” on the inside of the wrist. That way I would never be without my medical alert ID.

I think having a tattoo that identifies me as a diabetic is a great idea, although at age 62, I don’t know if I am up for it.

Nonsense! I say go for it if that is what you want. The pain of being inked is nothing compared to childbirth or kidney stones. And being 62 is no good reason to not get a tattoo. (I got my nose pierced for Mother’s Day when I turned 54!)

Age is meaningless! Sure, there’s some areas where the skin may be less elastic than it used to and not as desirable for tattooing anymore as age progresses - but the wrist isn’t likely to be an issue yet. One of my friend’s mother in law got her first tattoo (Non medical-related) when she was in her mid-60s. Now she has at least 3 that I know of!

As to the pain, most of mine wasn’t painful at all, except the area right close to the bend of the wrist. That got my attention. The post-tattoo healing where it feels like a sunburn/road rash for a few days is more irritating, to me, than the actual tattoo process itself.

I guess I’m not very sensitive to pain as I almost fell asleep during my last tattoo session.

It feels slightly sore or a bit uncomfortable for a day or two after, but it’s really nothing.

@SherryAnn I agree with the others, it’s never too late!

The only thing I will note is that as PWD we should take extra care before getting tattooed (make sure we’re in very tight control before, during, and after) and take extra care in the 2-3 weeks of healing with washing and cleaning the area and making sure it’s not coming in contact with anything dirty (I even make sure I wash all my sheets and blankets right before my session). I basically view tattoos as open wounds or bad burns while they heal and treat them as such and follow aftercare instructions from the artists to a tee.