Pump logistics for tucked in shirts

This is a silly question, but we can’t come up with a comfortable solution. My son has had his pump for about 6 weeks now and has been wearing shorts & untucked shirts since he got it. Last week, he had to wear a dress shirt, slacks & belt and we couldn’t quite figure out how to thread his pump tubing comfortably - the tail of his shirt tugged the tubing or got all bunched up. We ended up running it out between 2 buttons on his shirt, but he felt like it was very conspicuous there - and it was.

Where is he wearing the pump?

He prefers his stomach - about belly button height or lower on either side.

Don’t know if this would work for him, but sometimes I just stick the pump in my underwear. Wouldn’t work with boxers, but they’re usually snug enough to hold it. I usually stick it in back.

I’m also a big fan of the tallygear belts. They fit snugly and can easily be worn under clothing.

That’s pretty much what I do, run the tube out between the buttons.

What about his pocket? I have done that for years–run the tubing over the waistband of the pants and put the pump in your pocket. Makes it a lot easier to look at–no digging in underwear for it. I have also seen men who just clip it to the belt–looks like a pager, phone ot something–you would have to know it was a pump to ID it.

Some guys cut a small hole in their pocket and run the tubing through it so that you don’t see any tubing on the outside at all. If his tubing is long enough, there is also a calf thing that I have seen used by a pump trainer. It is a stretchy band and the pump goes right into it. pretty easy to get to also that way.

Some gals also cut a small hole in their pocket and run the tubing through it. I do not have a clip on my pump or use a case. It’s always in my pocket.

Occasionally when I have to dress up, I put the clip back on my pump and clip it to my waistband of my skirt if the top will cover it. If the top is short, I’ll clip it to my underwear underneath my skirt.

It’s often hard to find women’s slacks with pockets, but I won’t buy slacks without them. All of my slacks and shorts have holes in the pockets. Just don’t make the holes too big or in the bottom of the pocket because then things fall out. The holes have gone through repeated washings and they don’t seem to get frayed or bigger. Works great.

Now if Dexcom would finally integrate with the pump so I could quit having that receiver in my pocket. It’s much bigger and more awkward than my Minimed pump. I miss the pump integration that I had with my Minimed CGMS, but I hated the Minimed system (love the Revel pump though). It’s better to have a CGMS with mostly accurate numbers and that wasn’t my experience with my 2-1/2 years on the Minimed system.

I work in an office, where most days I have a tucked in shirt and I have found the same issues. I don’t like wearing it on a belt clip as I don’t like having the tubing hanging out and I don’t want it drawing extra attention. I usually do the method mentioned above, I cut a small hole it in my pocket, about half way up or higher and towards the inside edge of the pocket, don’t cut the hole in the bottom of the pocket or you loose change and keys can fall out the hole. Make the hole just big enough to fit the end of the set or the reservoir through it. If you know someone who is handy with a sewing machine it would be a good idea to sew a button hole around the edge of the hole so that it doesn’t freigh or tear over time. One thing to consider is that you may need longer tubing, since dropping your pants will tend to pull on the infusion set if the tubing is too short. I really like this method and usually do this even if I am wearing jeans and an un tucked shirt. This method is very clean, tidy and discrete, it gives you excelent access to the pump since it is just sitting in your pocket, the only downside is that it is a bit of a hassle if you change clothes several times throughout the day.

Thanks for the suggestions. He doesn’t mind wearing the pump on his belt, but the tubing through the shirt felt awkward for him. I like the hole in the pocket idea - we’ll give that a try for his dress pants. I’ll warn him about the length of tubing issue and we can get longer tubing if need be. He doesn’t usually use the meter remote to operate his pump, but the underwear idea might work if he has the remote handy, too.

Thank you - I knew you guys would have this figured out!

You also might get a buttonhole put into the pocket by seamstress (or maybe you can sew?), probably for just a couple of bucks, but they’d do it more solidly, to prevent ripping/ fraying?

I'm not big on sewing or cutting holes in clothes, so I just used this. It's a cell-phone case (a bit worn) that I got for $5 at Five Below, a discount store in my area (but not in Texas, sorry!). I've also gotten similar ones on the streets in Manhattan. You can see the tubing slightly, and I do need to "re-tuck" it occasionally, but it's not all that visible. With an infusion site on my stomach and 43" tubing, I have no problem getting it around my shirt-tails.

I should also add that it's easy to pull the pump out to use it, and leaves my pockets free for other stuff. Sticking it in your underwear as jrtpup describes could make bolusing kind of ...uh.. interesting.. and non-discrete. (Not to mention the alarms if it's kept in vibrate mode!) (sorry about the reflection/lighting in the photo, but you get the idea) 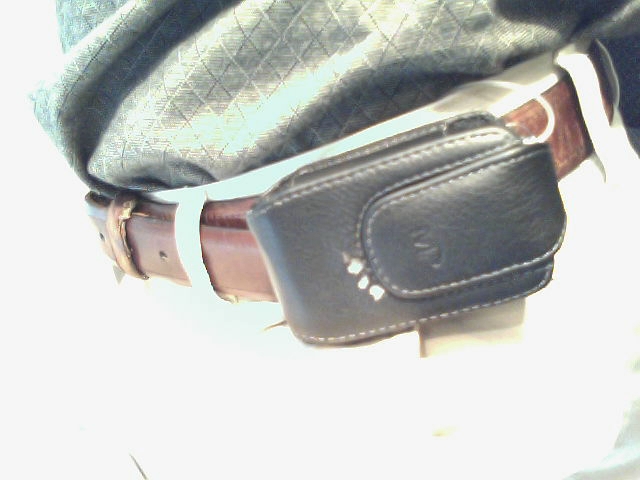 LOL Scott, it would be interesting except that I have a ping and use the remote

Ahh… I was wondering how that worked for you! (But not wondering too hard!)

Another option if the pants are not too form fitting is to use a spibelt. They are much smaller than the tallygear and can be adjusted to fit snugly or tightly. You can get a regular one which is what I have and I just tuck most of the tubing into the pouch or they have a special diabetic one that has a hole for the tubing.

Thanks Scott E for the picture - that case looks great; I’ll be on the lookout for one. It sounds like having some longer tubing on hand might help, too.

I have always used the hole in the pocket option and just carry my pump in my pocket. It works out pretty slick and it is easy to get to the pump.

You’re welcome. Which pump do you use? I never buy these online because I want to make sure the case fits nice and snug, but if you’ve got the same one I do, maybe I can help you figure out which one to get (it’s usually the smallest). I should note that the cover does have a magnetic closure, and that concerned me at first, but I’ve never had problems with the pump (Minimed 515 and later 523) because of it.

How does that work? Do you put the pump in your pocket the regular way, and feed the reservoir and tubing through the inside? Personally, I carry so much stuff in my pocket that I’d be afraid of the pump getting scratched, tubing getting tangled (in pens, for instance), or buttons being inadvertently pressed.

He uses the Animas Ping. Is your case designed for a cell phone?