So, there has to be a category for lines that aren't flatlines, but aren't exactly Himalayas either. I thought, maybe, Appalachians, but I'm not sure if I'm even spelling the word correctly.

Here's my attempt to steal the honor back from onesaint. I haven't spent too much time above my high set at 140,and not too much time beloe my low set at 60, but geez I've spent a lot of time bouncing in between the two over these klast 24 hours....

Thanks! I’m not feelin’ down about yesterday at all. I know it was less than perfect, but it was what it was.

I did not swim (it was a heated pool - almost 90 degrees) and my dexcom sensor is hanging on by MAYBE a thread. And hot tubs are a no-no with the pod, are heated pools okay? probably, but it was first day with the pod and I was not risking it! But I did stick my feet in and it felt amazing! Oh to have more money than I know what to do with…

Yeah, you’re a sicko, Danny – no matter how bad someone is feeling about their indiscretions, you manage to say something positive about it.

I’d say about 95.37% of the time I don’t succumb to emotional eating but for various reasons I needed to eat 25 chocolate dipped toffee caramel balls about the size of marbles. They did my mind right and my BS so wrong…but hey, I’m back where I want to be -in all ways:) 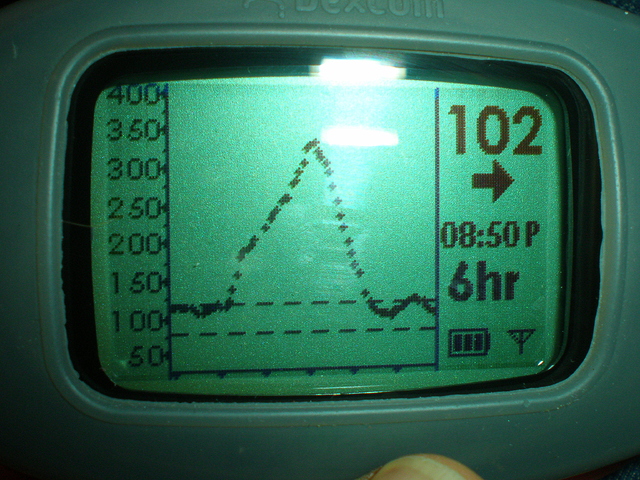 Should be in Rocky Mtn, but this is definitely the best ride in the park!

That is one hell of a peak! But at least it came down – I would have been far more frightened if it had stayed there! And I do understand the need for 25 (really?) chocolate dipped caramel coffee balls – have been known to do similar things myself! Maybe next time try more insulin, and possibly a square wave?

is a stalagmite the one that comes up from the ground? or is a stalactite? I could never keep them straight…

Sorry that it was one for the crapper, Courtney. I do hope that your mental/emotional recovery is as beautiful as your glucose recovery

Stalactites are the ones that hang from the ceiling – they have to stick tite up there! And just to be medical, the low number on the blood pressure is the diastolic, because if it went too low, you would di! Squirrel brain is on the wheel again!

Wow Bon Bon heavenly peak that it is. Glad you cleared it out and are back to where you want to be. =^)

Nice recovery by the way.

Stalagmites are on the ground, because you might trip on one!

I knew I needed something to finish that thought!

lol you two! I promise that I still will not remember those in the future!

In my view, anybody can make their blood sugar gyrate madly between DKA levels and nearly comatose hypos. The real challenge is exactly what Courtney did. Have a large excursion and then smoothly and quickly bring things under control. Once your blood sugar gets that high, you don’t just take a correction and hit a stable target. I think the usual response is to bolus repeatedly over a number of hours trying the bring the (*^%^^& reading down and then you have a hypo. Courtney’s response is like driving an aircraft carrier full speed into a dock and stopping on a dime.

I’m not planning on perfecting my aircraft carrier driving skills, but I am glad it worked out so well! Fun analogy bsc! 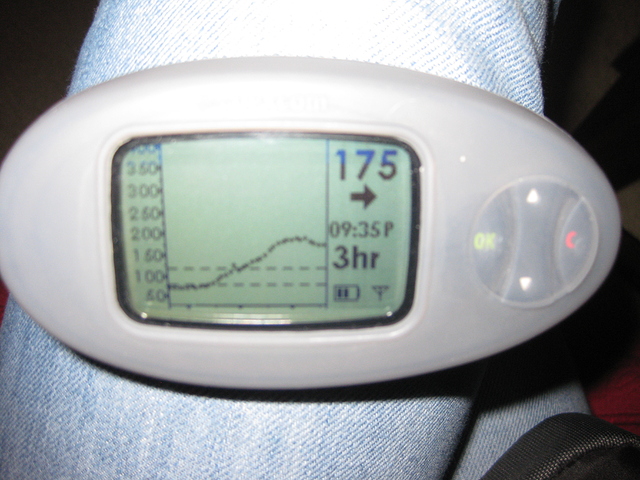 thanks! I avoided the rice and beans like the plague and counted the tortilla. But who know what they marinate the pork in? I’m trying to be patient and not over correct. Didn’t Tom Petty prophesy that the waiting is the hardest part?

I dunno, but his sister got lucky and married a yuppie as far as I recall. Yeah, took him for all he was worth.

Glad to hear you had fun. Kudos on keeping away from the bad stuff. =^)

How we change in this group! I remember when a curve like that would have been just fine with me. Of course, I didn’t have a CGM at the time, but would test at 90 minutes or 2 hours, and expect to see a number above 200. I was told it was fine, as long as it came down before the next meal. It usually did, if I had bolused enough. Nowadays, I expect to stay at least near 120 – but it’s clearly the low-carb that does it for me.

And you know, once in a while, it’s OK to feast – just hop back on the wagon tomorrow!

We made carnitas last winter sometime and I don’t recall it having any added sugar, quite a few peppers though? I did not bother trying to track down the carbs in Ancho chiles or anything like that. Good stuff though!!