Must Buy New Phone as DexG6 No Longer Supported 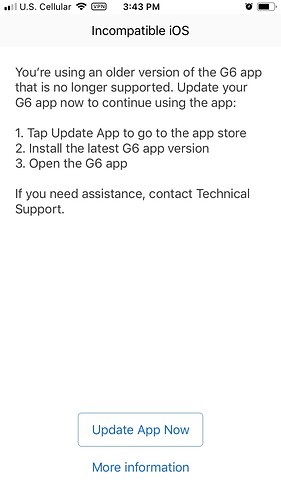 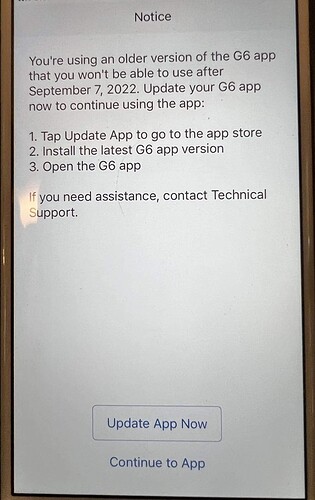 image892×1414 277 KB
I got a message on my Dexcom6 app on my iPhone 6 that as of Sep 7 it will no longer work because it has to has IOS of 13 or more to update the app, and the iPhone 6 currently only goes up to IOS 12.5.6. Now I’m sure to many you’ll be shocked I still use an iPhone 6 and what’s the big deal, but it is to me! I love my iPhone 6! It does everything I need it to, it’s small and lightweight for my small hands, it’s in excellent condition and doesn’t need replacing and a new phone will cost me at least $500.

I don’t care for the Dexcom receiver. It’s been years but I remember I didn’t like it. I especially didn’t like having to keep two devices on my person constantly. I have enough trouble just keeping my phone on me constantly! I’m alone most of the time and it’s essential I have my phone on me and obviously my Dexcom receiver, thus my preference for them to be one in the same.

I just looked at what our carrier has and looks like probably an iPhone 11. My husband recently got an iPhone 13pro and I know I don’t want that for two reasons 1) too big and heavy for my hands, 2) do not like the way it works in particular the touch screen, or rather doesn’t, neither does my husband.

So does anyone have any input or advice about phones and the use with the Dexcom 6 app? What works well and what doesn’t in your experience? Thanks.

Update: Upon edit it let me add the photo.

Sep 8 Update: Second screenshot shows what appeared on my phone today, accompanied by many beeps, like Signal Loss alert. There is no way out of it. When I use the link for “more information” it takes me to Dexcom website and tells me in a very brief paragraph that from time to time software updates are required to keep things working and thus it is time for a soft ware update. If I go to “update app” it tells me I must have IOS 13 to download the app. So I am now officially locked out of my Dexcom 6 App. But it kept beeping every five minutes to show me the same screen. Therefore I had no choice but to delete the app from my phone.
Several told me they have never done a Dexcom app update on their phone and they are still using their Dexcom 6 app on their phone years later no problem, that Dexcom can’t just turn off the app on my phone, that they can the Follow and Clarity that has to go to the Cloud, but not the Dex 6 on my phone communicating with my transmitter. Well in fact Dexcom just did that very thing. They shut me out of my Dexcom 6 app. Do not pass Go. Do not collect $200.
I’m hooked up just to the Dexcom receiver only now. For the $1,200 it cost it doesn’t do much, and is a pain in the butt to use.

I used to have high-end phones for decades until a couple of years ago and felt they were more trouble than they were worth. I decided to try a Samsung A71 (Android) phone dual SIM and unlocked as I travel the world. They are available on Amazon in the $200-$400 range depending on needs. This phone has worked flawlessly with Dexcom G6

The app you currently have on your phone will still work. You just won’t be able to upgrade it.

They are not going to go to your phone and remove the Dexcom app or disable it.

I don’t ever upgrade the Dexcom app on my phone and it still works. The version I have now is over 4 years old, and it works fine.

I’ll just add to that advice, turn off automatic updates on your phone because you can’t go backwards once you accept an update.

I share your size concerns. The iPhone SE and the 8 are similar in size to the 6. I opted for the 8 and had the battery replaced last year.

Hmmm. Well that’s interesting. Thanks for your input.

Good to know I will still get readings on my phone! So I won’t be in quite as much of a rush at least.
Not good though that Follow won’t work as my husband follows and has had to wake me for lows on numerous occasions, including times when I’ve been as low as 43. So that’s kind of important. Plus he worries if he can’t check in from time to time when he’s away from home in case I fall asleep and don’t wake from the alarm but for some reason I do wake when he calls call me. Or Heaven forbid I don’t and then he’ll be calling 911.

And I do use Clarity reports for info too. So dang. I don’t know why iPhone won’t allow my software to update any quicker than it does? And two, why Dexcom says they won’t support the app anymore on less than IOS 13? Sigh.

I do manual updates.
However, it doesn’t have anymore updates available at this time and I’m at 12.5.6 so am currently stuck.

I’ll have to look elsewhere besides our network provider for a phone then as it seems the smallest they have in iPhones is the iPhone 11.

Thanks. I’ll check it out.

It’s not just the iOS updates but the dexcom update will also push to your phone if you have auto updates on.

I might be carrying my old iphone 8 around lol. My iphone 13 promax is not behaving itself with the new Dexcom upgrade. It’s been pure annoying, and erratic, so I turned off all alerts. I used the alerts to my benefit though, so now I have pulled out my iphone 8 to see if I can use it for the Dexcom ap as it used to work great!

The new phones and new updates are not always better, at least where Dexcom is concerned.

Google Pixel 4A. Prob 250 used. Most phone for the money. I gather the g6 app does not work with android 13. Abandon apple and come to the light!!!

Ah, very interesting!
The two tech support people I spoke to at Dexcom were not helpful. The first didn’t know anything about it. She thought we could circumnavigate it by deleting and reinstalling the app on my phone. Of course we ran into the same notice because it automatically wanted to download the new version of the app which requires IOS 13 or above. While talking to her further about various phones the call was dropped. I called back and got someone else who was way LESS friendly

knew all about it and insisted it was a “required” upgrade they had to make and it takes time to get their approvals and such, etc… I wanted to clarify that iPhone 12 mini would support the Follow app and Clarity, but especially Follow, as there was some confusion how that was listed on their website. She said as long as it hasn’t been updated to IOS 15 yet. She basically kept trying to convince me that I’ll be just fine without the Follow app until sometime, as yet undetermined, that they are updated and compatible with IOS above 15. Easy for her to say, she’s not living with diabetes. Sheesh!

So having my old phone not upgrade to IOS 13 is a problem. Getting a new phone that has software already loaded to above 15 is problematic. Hmmm

Abandon apple and come to the light!!!

Might have to. Is your phone small in size? Seems like Apple anyway is insisting on making their phones bigger these days. The two newer ones, 11 Pro and 12 mini, are a bit smaller (still bigger than my current one) seem to have been discontinued in favor of the larger models.

Seriously though this phone has been perfect for me, is in excellent condition, does everything I need it to, never had a problem until right now with this Dexcom issue.

As I read your message again and think about what the Dexcom tech rep told me, really ticks me off that Dexcom would not share this information with me. Seems they would rather I be stressed about being without a vital life saving medical equipment (no Follow) or unnecessarily spend $500-800 on a new phone that I otherwise don’t need.

As I read your message again and think about what the Dexcom tech rep told me, really ticks me off that Dexcom would not share this information with me.

Ya, there is a lot of stuff like that. They also tell you that you can’t put the Dexcom stuff through the x-ray machine at the airport. But I have done that a bunch of times and it still works.

Your best bet is to watch some 4A video reviews. May be a tad bigger then you like. I find it just right.

Thanks. I’ll do that. I think I’ll be watching reviews of a lot of phones. Other than folks here making recommendations I don’t know how else to get any ideas of what might work for me or what I might like.

But whatever phone I go with sounds like I need to make sure it doesn’t get downloaded with the most recent software of 15 IOS if an Apple, as that is currently problematic with Dexcom. I haven’t heard anyone say yet about new software on Android phones and incompatibility problems. So still wondering about that.

sounds like I need to make sure it doesn’t get downloaded with the most recent software of 15 IOS if an Apple, as that is currently problematic with Dexcom.