OMG. I’m so excited! Tandem finally released the t:connect mobile app. As a Linux computer user, that was never supported, I can finally upload my data.

The t:connect® mobile app offers a convenient and discreet way for t:slim X2™ pump users to monitor their pump and CGM data within the convenience of their mobile device. As a secondary display, the t:connect® mobile app provides easy access to monitor their data, while uploading wirelessly into the cloud-based t:connect® web application, eliminating the need to plug in their pump during healthcare provider visits. Download now and get connected to an advanced way to monitor your diabetes. Tand...

Next up… control your pump from the app. I won’t hold my breath for that one.

Yeah, after playing with it for a few minutes, it’s not quite as exciting as I hoped. I thought I might be able to use it instead of Xdrip for CGM display. It’s definitely not much of a real time app, though. No widget. The notification just says “Tandem Pump Connection: connected to pump”, with no useful information.

Still it’s nice to finally be able to see/share data. They can see how wrong the 5 hour forced insulin duration is for me, since I always go low at 4-5 hours when the IOB says “0”.

I also need to feed the pump, and just got an “EMPTY CARTRIDGE ALARM” pop-up on the phone. I’ll probably disable the alert notifications, though, since I can’t turn them off via the app yet.

I do like that it is really easy to see your bolus history, without digging through the pump menus.

As someone who was never able to look at the PC reports, it too me a few minutes to realise what the numbers on the graph were.

Also looks like they have some serious security in place to make sure only identified users can link to the pump. Reminds me of the steps I have to go through to connect to my work email using my personal device.

Compatible phones list is pretty short. Is that regulatory thing or is the a real tech issue?

Still not in our App Store. Two years later.

Guy,s you’ve made the app. Why restrict it?

The list is short for Android phones but includes most iPhones. 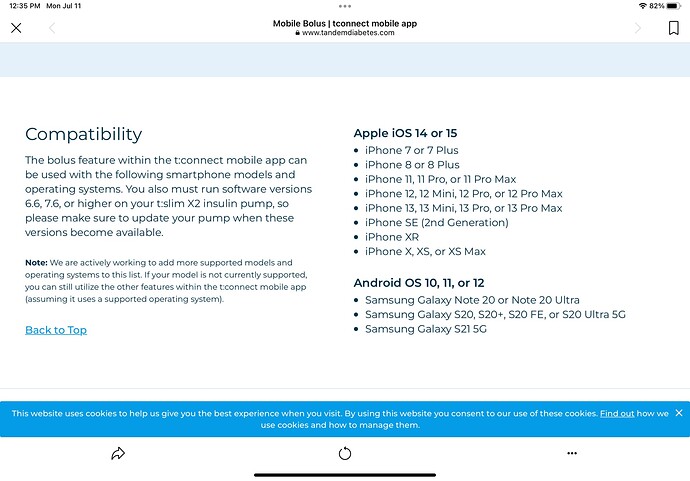 Compatible phones list is pretty short. Is that regulatory thing or is the a real tech issue?

Is it safe to assume that you’re asking about the new mobile bolus feature update for T:connect, not the original T: connect app that didn’t allow any pump interaction? It just displayed pump information. There are different versions available right now, depending on your phone. And they’re still doing a very slow, controlled release of the newest version with the added functionality. There weren’t many restrictions at all for the original app, but the mobile bolus capable updated version has a lot more.

I think the answer to your question is: both?

I believe any relatively recent Android phone should be capable of running both versions of the software.
And by freely recent, I’m talking phones that came out in the last six years or so. Android version 7+ seems to be the common minimum system requirement for apps because there was a big infrastructure change then. All you really need bedsides that is a Bluetooth radio, and that’s common. One of the problems, though, is that newer versions of Android with ever increasing security and battery-saving features make it really difficult to whitelist an app to run undisturbed in the background. Even if you can whitelist an app, you can’t necessarily whitelist system functions, so as stop your phone from disabling your Bluetooth connection.

The Samsung S10 seems to be the preferred device for both Omnipod 5 and Tandem’s mobile interactions. I’m assuming there’s a weakness in that phone that makes it easy to manipulate, coupled with it’s popularity, that makes it a good Android starting point. Tandem’s mobile bolus feature was approved in the US to not need further regulatory approval to add other devices to the compatibility list, so it’s up to them to vet other makes and models one by one. I forsee something similar to Dexcom’s G6 compatibility list, where they focus on vetting the popular flagship phones. Also like the Dexcom G6 app, I suspect our fabulous community hackers will present a “build it yourself” option that removes the app’s compatibility check… But of course, you assume all risks yourself if there’s a malfunction, because your phone hadn’t been vetted.

I honestly don’t know much about how this works with Apple phones.

Also worth noting, all this is only possible in the US. There is no T:connect app in other countries. Tandem hasn’t invested in the regulatory approval elsewhere because they’re working on a new platform, Tandem Source. It’s scheduled for international release later this year. T:connect is going the way of the dinosaur (just like Basal-IQ). They haven’t made it clear if the mobile bolus will be part of the Source platform, or if it will be a different app.

Yeah, that’s kind of what I thought. Notice the s22 is not on the compatibility list (yet). I have a Note 8, Android 9. I suspect that it could handle boluses just fine, but I won’t hold my breath.

iPhones are easier because Android is not a single OS. Each phone maker has to adapt it to interface w/ their hardware. Since Apple is the only one making iPhones, iOS really is one OS.

Lots of chatter and frustration elsewhere over many Android phones being incompatible with this update (at this point) - newer Android phones still being paid off. How frustrating. I’m on an iPhone 13 mini and the remote bolus feature is brilliant. I’m enjoying it so much I went out and celebrated by buying three dresses.

You can’t dismiss alarms on the app and you likewise can’t ask for an extended bolus. But I can easily go an entire day without touching the pump.

Note: I have a first generation iPhone SE that is supposedly compatible with the latest version of t:connect with either IOS 14 or 15.

I had been running IOS 14.7 … but got the “Device not supported error message”. After a call to Tech Support, I was instructed to upgrade to IOS 15.

Having gotten used to seeing my CGM and bolus information on my phone for several years, I’m not happy with what I expect is a Tandem software bug. While I’m confident that most iPhones are running t:connect 2.1.3 successfully, if you have a first generation SE, I suggest you proceed with caution before upgrading your t:connect app. I believe that other old iPhones, including those in the 5, 6, or 7 series are also not supported at this time. Tech Support at Tandem told me that working to correct this issue, but that a fix is likely WEEKS away.

I live in the US and I still don’t have the new version and I can’t figure out how to get it.
I signed up on the site but now it says they have enough people beta testing it and I’m SOL

I am like you. I filled out the form to get the early release but never got a response from Tandem. We will get it when we get it….

I got a response. GO POUND SAND.
There were no selection criteria. I could have found a five year old to do it in ten minutes. Folks with vision problems should have gone to the top of the list.

I got the email acceptance on Friday 7/15. I did the training beginning Saturday, but hit a hitch on the 2nd phase slide 14 of 36 froze. This was on a Mac Book Pro. Sunday afternoon I tried my iPad and was able to finish. The update with my Mac Book went OK. When I finished and put the cartridge back in, I did a 0.1u bolus to test. Did fine. I have been using it for bolus ever since.

I got an email last night for a survey. I noted about the freeze and that the emailed instructions aren’t clear about when to reinstall or install a new cartridge. You have to have at least 70u in the cartridge to reuse it.

Be sure to have your Dexcom calibration code handy because it will be stopped on the pump and you will need to restart and enter the code. Dexcom app on the phone never loses data.

I have the remote bonus update with an unapproved phone (Pixel 5a). Very frustrating. The bolus feature appears in the t:connect software, but when you try to access it, you get an error message.

Has anyone successfully hacked the t:connect software to allow for mobile bolusing on unapproved phones?

I was offered the opportunity to try the new app on my iPhone. Was excited, not so much after I read that you can not do extended blouses from the app.
I did go through the setup on my phone which I keep updated to the latest iOS. Unfortunately the setup instructions were written for some earlier version so it took a bit more time to install than I expected.
I have not completed the setup or updated my pump’s software. Debating whether I want to go through the effort given I use extended bolts a lot.

That’s funny. I never use that feature. But instead I take serial corrections.